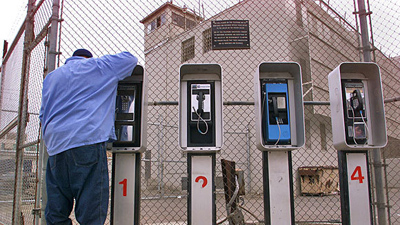 An inmate is shown at a bank of prison pay phones in Tracy, Calif. (Los Angeles Times)

The deal won't cost taxpayers a dime, state officials insist, because the company, Global Tel Link, also owns the traditional pay phones prisoners can legally use. Company officials are betting that once the contraband cell devices are disabled, demand for pay phones will skyrocket.

Like other states, California is battling a plague of phones smuggled to inmates. Many are used by lonely prisoners to stay in touch with family and friends, but they've also been used to run criminal enterprises on the streets, organize assaults on guards and intimidate witnesses, prison officials say.

Last year, California prison guards confiscated more than 15,000 contraband phones, nearly one for every 11 inmates. Five years ago, only 261 of the devices turned up behind prison walls. Even Charles Manson, arguably the state's most notorious inmate, has twice been caught with contraband phones.

"This groundbreaking and momentous technology will enable [the prison system] to crack down on the potentially dangerous communications by inmates," said Department of Corrections and Rehabilitation Secretary Matthew Cate, who has championed a technological solution to the problem.

Others have called for searches of prison employees - a main source of contraband cellphones, officials say - on their way into work.

Visitors go through security stations similar to those at airports as they enter the facilities.

The politically powerful California prison guards' union has fought the search effort, arguing that such security measures would be an insult to its members and cost the state millions. Correction officers are paid for "walk time," the time it takes to get from the front door to their posts.

Jamming of cellphone signals in a particular area, such as the space surrounding a prison, is prohibited by the Federal Communications Commission. Last year, when Global Tel Link's contract to provide pay phones in state lockups came up for renewal, Cate said the next vendor would have to pay for a legal way to prevent cellphone use.

Basically, each prison will get its own cell tower, which prison officials will be able to control. They'll make a list of approved phones that can send and receive signals, and all others will be rendered useless. Installing the systems at all 33 California prisons could cost between $16.5 million and $33 million, Cate estimated last year.

A typical 15-minute call from a prison pay phone costs the person who receives it about $2, according to prison officials. Global Tel Link will not be allowed to raise rates once the cellphone blocking system is in place. In fact, the company will be required to reduce costs to users slightly.

The payoff for the firm is expected to come entirely from increased demand. Last year, a one-day test of a similar system at a single California prison intercepted more than 4,000 attempts to place calls, send text messages or access the Internet, prison officials said.

Use of pay phones, which are recorded and monitored by prison guards, went up 64% in the days after the test.

Global Tel Link did not respond to a request for comment Monday.

Inmate advocates argue that the vast majority of prisoners use their smuggled phones for communication with friends and family, and that keeping those ties strong is essential to their successful reintegration to society after they're released.

"Aside from cases where an inmate is confined for child abuse or molestation, the lines of communication between inmates and their families should be as open as possible," said Rebekah Evenson, an attorney for the Prison Law Office in Berkeley. She noted that federal prisons allow inmates secure email accounts and suggested those might be a better way to monitor prisoners' communications.