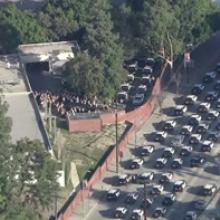 Los Angeles County Sheriff Jim McDonnell said he met Thursday with the family of slain Lancaster Station Sgt. Steve Owen, whom he called a role model and a hero.

Owen, 53, was shot in the 3200 block of West Avenue J-7 after responding to a residential burglary call just after noon Wednesday.

He was rushed to a local hospital, where he died a short time later.

His body was taken in a procession of dozens of vehicles from the county coroner's office in Boyle Heights to Lancaster on Thursday evening. Fellow law enforcement officers, firefighters and local residents lined up on freeway overpasses to salute.

"We are bringing our sergeant home," the sheriff's Lancaster Station wrote in an advisory. "We stand united with our community in our grief."

McDonnell spoke to reporters at the station at 4 p.m., shortly before the procession was set to begin.

"It's our tradition to reserve the title 'hero' for only those who've been formally recognized for acts of heroism. It's a word intentionally reserved for someone like Sgt. Steve Owen," McDonnell said.

The sheriff said after he was took office following his 2014 election, he attended some events in which he had to ride on horseback, including the Rose Parade.

Owen helped him through it.

"I had never done that before, and he was somebody who was a real horseman ... truly a gentleman, somebody who wanted to be able to be helpful in whatever it was he did," McDonnell said. "Everybody looked to Steve as the go-to guy, and within the organization he was looked to just as a role model for everybody else."

Owen's wife, a sheriff's detective, was able to get to her husband's side before he died at Antelope Valley Hospital, authorities said.

Owen was a well-liked sergeant who served the community for years before being promoted in 2011.

In a statement late Wednesday, the Lancaster Station wrote that Owen was a "true hero to everyone who met him."

"It is never easy to say goodbye to a partner and a friend," the statement read. "Our lives and our station will never be the same. Tonight, we grieve our loss. Tomorrow, we will rise and continue to protect our community just like you would want us to."

The suspected gunman, identified Thursday as 27-year-old Trenton Trevon Lovell, a parolee from Lancaster, shot Owen and then stood over him and "executed" the sergeant with four more shots, McDonnell said.

Following the shooting, the man entered Owen's patrol vehicle and rammed a vehicle driven by another deputy who responded to the burglary call. The deputy fired at the suspect, who then ran into another home where two teens were alone inside. The teens hid from man and called authorities. 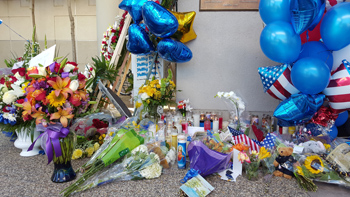 Flower, balloons, candles and cards were left the the sheriff's Lancaster Station on Oct. 6, 2016, to honor Sgt. Steve Owen, who was killed the previous day. (Credit: KTLA)

Fearing the teens' lives were in danger, officials sent a special weapons team into the home, prompting the suspected gunman to flee out a back door.

He was taken into custody without incident. A weapon was recovered at the scene.

Wednesday night, law enforcement officials and firefighters paid tribute to Owen by lining up on overpasses and saluting as his casket as it was driven to the coroner's office.

Owen had been a sergeant with the Lancaster Station for five years and had been with the department for 29 years.

Owen was in 2014 awarded a medal of valor - the department's highest honor -for helping arrest a man who used a driver as human shield while trying to elude officers who had been pursuing him.

Owen is survived by his wife Tania, adult sons Brandon and Chad, stepdaughter Shannon and mother Millie, according to a statement from McDonnell.

Candles, balloons and flowers were among the growing number of memorial items seen outside the Lancaster Station Thursday in honor of Owen.