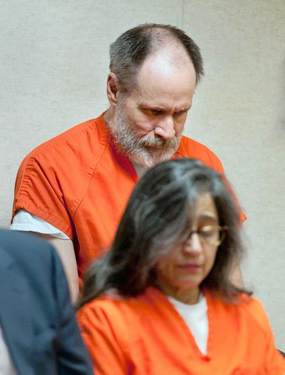 In a report issued the day before state Sen. Ted Gaines (R- Roseville) has scheduled a "community discussion" here to focus on tightening parole requirements, Pierson cited the fact that parole agents over the years had made about 60 visits to Garrido's home and failed to discover Dugard, who was kept hidden in the backyard.

The prosecutor directed his sharpest criticism toward what he called the criminal justice system's "over-reliance upon the psychiatric profession to predict future dangerousness."

In 1977, Garrido was sentenced to 50 years in federal prison for rape and kidnapping. But he won parole in 1988, based in part on the strength of positive psychiatric reports.

"Common sense would tell you that the best predictor of future behavior is past behavior," Pierson wrote in his report, which described Garrido as a "master manipulator" who had convinced court-appointed psychiatrists, psychologists and counselors that he was no threat - even while he was holding Dugard captive.

For example, Pierson noted, a federal parole agent in November 1997 reported that a psychiatrist treating Garrido had offered the assurance that his "prognosis is excellent.... I do not suspect he will ever be at risk for violence."

Three days earlier, the then 17-year-old Dugard had given birth to her second child fathered by Garrido.

Pierson on Tuesday also made public more of the evidence he collected during the prosecution, saying the criminal justice system's failure in Dugard's case was so extensive that "we need to release enough information so the public understands the magnitude of it."

Among videos officials posted on the El Dorado County district attorney's website Tuesday was a short clip that Garrido shot. Recorded in what appears to be a public place, it captured several young girls in cutoff jeans, the lens lingering on their thighs.

Garrido can be heard asking an adult woman, presumably his wife: "Do you think anybody can see me?" The woman assured him that he was safe.

Another video showed Nancy Garrido under interrogation in 2010 after her arrest. In it she admitted to filming a least 10 young girls for her husband. She persuaded the children to perform gymnastic poses, like the splits.

Some of that footage was shot in May 1993, less than one week after Phillip Garrido's release from a monthlong jail stint for violating his parole. He had failed to take a drug test.

At the time, a federal parole agent told the judge the violations were technical and said Garrido should be "released back to the community at the earliest possible time," according to Pierson's report.

It was the only time Garrido went to jail for parole violation.