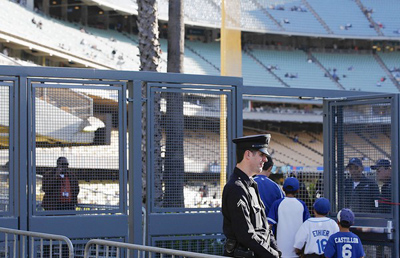 An LAPD officer stands at an entrance to Dodger Stadium before the start of the May 18 game against the Giants. The team had reduced security measures in recent years and now faces a lawsuit from the family of Giants fan who was brutally beaten in the parking lot. (Luis Sinco / Los Angeles Times / May 18, 2011)

Prosecutors met with Los Angeles police detectives Tuesday to review the case against a suspect in the beating of San Francisco Giants fan Bryan Stow, and determined that more investigating needs to be done before charges can be filed.

Typically, suspects must be charged within 48 hours of an arrest, but in this case Giovanni Ramirez, 31, is in custody on an alleged parole violation. He was arrested Sunday in connection with the beating of Stow at Dodger Stadium after the team's season opener.

Police said Ramirez was staying at a different apartment from the one he had registered with parole officials, a potential violation of the terms of his release.

The sources, who requested anonymity because the investigation is ongoing, said the parole hold has given investigators flexibility to conduct more work before formally presenting the case to the district attorney's office. They stressed that the decision to conduct additional investigation was not a reflection on the strength or weakness of the evidence against Ramirez and said such a move is routine when suspects remain behind bars on unrelated matters.

They declined to specify what additional investigation needed to be done, saying they wanted to avoid jeopardizing the case. But police officials have scheduled a physical lineup on Wednesday to determine whether witnesses identify Ramirez as the assailant.

Earlier Tuesday, Stow's family sued the team and owner Frank McCourt, alleging that cutbacks in security, an abundance of alcohol and antiquated facilities - including light fixtures dating from 1962 - contributed to the brutal attack.

The lawsuit filed on behalf of Stow and his two children contends that the team should have provided more security, especially for the high-profile opening day game against rival Giants. Stow, a Santa Cruz paramedic, suffered brain damage from the attack and remains in critical condition at San Francisco General Hospital.

The suit was filed against a number of Dodger and McCourt entities but did not name Jamie McCourt, who has been fighting with her husband in divorce proceedings over ownership of the team.

Even before the attack, Stow, 42, and his three friends were harassed during the March 31 game, with other Dodger fans repeatedly taunting them and throwing peanuts, hot dogs and wrappers at them - "clear signs of intimidation" that Dodger security personnel should have addressed, the suit alleges. The assault lasted over "a prolonged period of time," but it took 10 to 15 minutes for Dodger personnel to arrive at the scene after Stow was injured, according to the lawsuit filed by attorneys Thomas Girardi and Christopher Aumais.

An attorney for the Dodgers said in a statement that the team and its owner would fight the accusations.

"Bryan Stow suffered a devastating injury at the hands of criminals who should be prosecuted to the fullest extent of the law," the lawyer, Jerome M. Jackson, said. "But, to be clear, Mr. McCourt and the Dodgers will defend themselves against the allegations made by Mr. Girardi in the lawsuit that he filed this morning."

Jackson did not address specific allegations in the lawsuit.

The suit, filed in Los Angeles County Superior Court, noted that fans who are ejected from the stadium during the game for being drunk or belligerent are left in the parking lot, making the area even more dangerous. Stow was attacked as he and his friends made their way through the parking lot to the taxi line.

Gang members are known to gather in the stadium's parking lots during Dodger home games, the suit alleges. Police have said the presence of gang members has increased at the stadium in recent years.

"The lack of security and inadequate lighting presented a perfect opportunity to commit a variety of crimes," attorneys wrote in the suit. "Unfortunately for Bryan Stow, this is exactly what happened."

The lawsuit blames the McCourts' "lavish lifestyle" for what they call a "disturbing reduction in security staff."

The Dodgers eliminated uniformed LAPD officers from its security staff for most games after the 2008 season, The Times has reported, instead relying on security personnel in polo shirts.