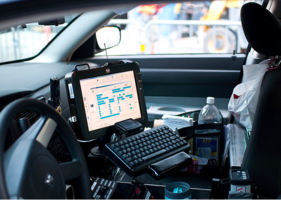 Law enforcement agencies around the country are increasingly reaching out to the public through social networking tools. But navigating cyberspace poses new challenges for cops-and the reporters who cover them.

If the nation's law enforcement agencies are not using social media networking, they're missing out "big time" on a key tool for connecting with the public and the press, one of the nation's top police experts warned yesterday.

"Either listen in and join the conversation, or they get to talk about you behind your back," said Capt. Mike Parker, who heads the media and marketing efforts of the Los Angeles County Sheriff's Department-the largest sheriff's department in the world.

The special event, hosted by John Jay's Center on Media, Crime and Justice (one of the founding partners of The Crime Report) and the Intercollegiate Studies Institute, was aimed at helping police and journalists navigate the brave new world of 24/7 crime news coverage in the "Age of Twitter." The conference was co-sponsored by American Police Beat magazine.

Social media has drastically changed the landscape for law enforcement and the media who cover them, observed Nancy Kolb, senior program manager for Community Safety Initiatives at the International Association of Chiefs of Police (IACP), which recently established a Center on Social Media to assist law enforcement agencies in establishing policy guidelines for the use of social networking tools.

More than 1,800 police agencies are now listed in the IACP's online directory, Kolb noted, adding that as police increasingly use social media for criminal investigations and for reaching out to their communities, law enforcement managers need to develop proper strategies for their use.

Both Kolb and Parker noted that there were many examples of police officers improperly or unwisely using personal Facebook or Twitter in ways that reflected poorly on their agencies-which makes it imperative for police leaders to establish clear guidelines.

Nevertheless, said Kolb, "social media is not a fad."

"It is not going away," she added. "Now, the community expects it."

Kolb listed some of the ways these tools could be beneficial for agencies:

Parker, who has pioneered the use of tools such as Twitter and Facebook for the Los Angeles County Sheriff's Department, pointed out that social media represents one of the "greatest opportunities" for modern policing strategy in many years.

And it's hard to avoid if police want to make headway in today's crowded information landscape. Twitter gets more than 300,000 new users every day. The average Facebook user has 130 friends and is connected to 80 community pages, groups and events. Approximately 250 million users log on to Facebook at least once each day.

In the process, it has also radically transformed the traditional relationship between law enforcement and journalists. Parker admitted that he will often use social networking tools to connect directly to the public on breaking news stories or on news about his department-often in effect bypassing traditional news outlets.

"We want to be able to tell our story," he said, joking that news editors sometimes treat him as a "managing editor."

Steve Johnson, senior regional editor for New Jersey Patch.com, an AOL chain of hyper-local news sites, agreed that news media who similarly deploy social networking tools, need to develop their own strategies for covering crime and justice stories that take into account how law enforcement agencies are operating in the new media landscape.

"We (will be) glad to work out these relationships," he said.

But some of the traditional suspicion between reporters and police surfaced during the roundtable, as several journalists pointed out the difficulty they had in getting police to confirm information or provide key details.

At a session entitled, "Public Safety Professionals, Old Media, New Media: Can We All Get Along?" Capt. Parker was joined by Capt. Jeff Paul from the Morris County (NJ) Prosecutor's Office; Ted Gest, President of Criminal Justice Journalists; and Tom Meagher, Computer-Assisted Reporting Editor for The Newark Star Ledger, the state's largest daily, to discuss how to improve communication between cops and reporters.

Gest pointed out that the headline-driven landscape of social media can sometimes lead to incomplete reporting, and noted that the public's need for accurate, context-driven information was still paramount.

And the onslaught of social media technology doesn't replace the necessity of developing a personal relationship between reporters on the crime beat and police.

"I'm going to provide more information to reporters who take the time to establish a personal relationship, who I can trust," said Paul, who holds down the twin jobs of heading tactical operations and spokesperson for the Morris County prosecutor.