Skip to main content
13
Sep 2016
Rams Agree To Pay Full Cost Of Security, Other Services Provided By City On Gamedays 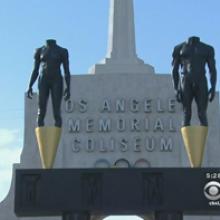 The Los Angeles Rams have agreed to reimburse the full cost of city services incurred during home games at the Coliseum, including for police, fire and street services, Mayor Eric Garcetti announced Tuesday.

"Stan Kroenke and the Rams organization made it clear to me from the start that they intended to be partners with the city and good neighbors to the people of Los Angeles and the region," Garcetti said. "The commitment they made today, to cover the cost of game-day impacts to the city - including police, fire, and sanitation support at and around the Coliseum - is a win for all Angelenos."

Police presence at the games will also not take officers away from existing patrols around the city, Garcetti said. Only off-duty police officers will provide security at the games.

"This partnership ensures that fans will continue to enjoy a secure and family-friendly experience at the venue, with no impact on our ability to provide public safety to all of our communities," he said.

The Los Angeles Police Protective League, the union that represents LAPD officers, has been pushing the team to pony up money for security costs.

The LAPPL estimated that the security will cost the city about $2 million a year, with more than 200 officers needed at each game.

Former City Councilman Dennis Zine and Los Angeles resident James Bibeau filed a taxpayer lawsuit last month looking to force the team to fund the security cost, saying it would otherwise be an unlawful gift of public funds to the Rams.