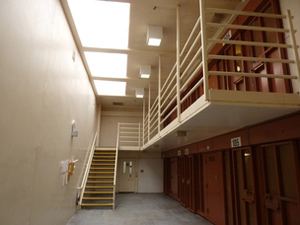 Hundreds of California prisoners locked in stark segregation units could be transferred to regular prison cells under new policies being developed by state corrections officials.

The transfers could include inmates who have been held for decades at Pelican Bay State Prison's windowless Security Housing Unit, which was the center of two recent hunger strikes that drew participation from thousands of inmates.

Officials from the California Department of Corrections and Rehabilitation are planning to review the files of every prisoner now housed in the state's four Security Housing Units. They will retroactively apply new criteria determining who is placed in the facilities and for how long, according to an Oct. 13 memo signed by corrections Undersecretary Scott Kernan, who retired last week.

"Those who no longer meet the criteria would be released from the SHU (Security Housing Unit)," states the memo, which also was signed by representatives of four advocacy groups and distributed to inmates. Officials confirmed the document's accuracy.

At issue is the system used by the department to identify, or validate, inmates as members or associates of one of seven prison gangs.

According to state law, an associate is an inmate who is "involved periodically or regularly" with members or associates of a gang. Formal identification of the inmate by the corrections department requires three independent pieces of evidence.

But advocacy groups say the evidence used by the department, such as tattoos or drawings, often is vague and inaccurate. What's more, they say the process does not always identify men involved in violent or illegal acts.

Once validated, the inmate is locked in the special unit for an indeterminate term. Those inmates include so-called associates.

According to department data obtained by California Watch, 79 percent of the validated inmates being held in the special units are classified as prison gang associates rather than full-fledged members.

In an interview prior to his retirement, Kernan said a new policy was needed to move some of those inmates out of Security Housing Units to make room for other prisoners who pose a greater security threat.

"I've said very publicly we over-validate and don't do enough documentation for those associates," he said.

Instead, Kernan said the new policy should focus on isolating gang leaders and inmates involved in acts of violence.

"Those are the people we should put in places like the SHU," he said.

Former corrections officials say the transfer could extend to hundreds of prisoners if the department uses a criteria that focuses largely on an inmate's behavior. Corrections spokeswoman Terry Thornton said it was impossible to speculate on precise numbers until the new policy guidelines are finished.

A 2007 study commissioned by the corrections department recommended establishing "Security Threat Groups" and focusing on the biggest troublemakers inside those groups, so inmates are not locked in the Security Housing Units merely for alleged affiliation with a prison gang.

Kernan said officials were looking closely at the report's recommendations but would approach any changes to the Security Housing Units with caution.

"We are not going to be pushed by the inmates or their advocates to change policy of this magnitude and get people killed," he said. "We're going to do it slow and methodical and make sure we're doing the right thing."