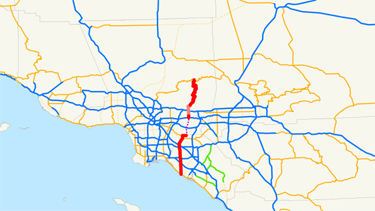 A section of a highway in the La Mirada area will be dedicated Friday in memory of the first Los Angeles Police Department undercover officer to be killed in the line of duty.

The ceremony to dedicate the Gerald "Blackie" Sawyer Memorial Highway will be held in the city of La Mirada, where Sawyer lived with his wife and children and was an active member of the community.

The highway dedicated to Sawyer's memory is state Route 39, also known as Beach Boulevard, between Hillsborough Road in La Mirada and Stage Road in Buena Park.

Sawyer had been on the LAPD for 10 years when he was assigned as a narcotics officer working on a joint task force with the U.S. Drug Enforcement Administration. During a sting operation to buy 20 kilos of cocaine on Nov. 6, 1973, Sawyer was shot by a drug dealer in a hotel room in Santa Monica, police said.

"LAPD officers and Drug Enforcement Administration agents in an adjacent room, who were monitoring the narcotics transaction, immediately rushed into the hotel room and took the suspect and (an) informant into custody," according to an LAPD statement.

Sawyer was posthumously awarded the LAPD Medal of Valor in 1974 and the LAPD Purple Heart in 2014. In 1992, the LAPD Training Division made a video reenacting the events of his death.