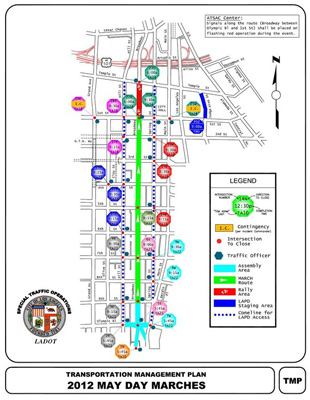 2012 May Day Marches - Click here or on image to view full size.

Numerous streets in downtown Los Angeles and beyond will be closed Tuesday as various May Day marches move through the city.

According to the Los Angeles Police Department, the following streets in downtown Los Angeles will be affected, beginning as early as 7 a.m. and continuing until 7:30 p.m:

Other marches are planned in neighborhoods across the region. There will be a march Tuesday morning from Saticoy Street and Van Nuys Boulevard to the Valley Civic Center, beginning at 8 a.m. Protesters will then take mass transit to join downtown L.A. protesters.

Protesters will march and drive through East Los Angeles and Boyle Heights, also meeting other protesters downtown. A similar arrangement is planned through South Los Angeles. Another protest is scheduled from Santa Monica through Westwood, Beverly Hills and into downtown L.A. It's unclear how much either of these demonstrations will affect traffic.

In addition, Los Angeles International Airport warned that traffic in and out of the main terminal could be slowed by a planned protest just outside LAX.