SAN BERNARDINO -- Both police and fire services have already been strained by the city's budget situation and will likely suffer more as a result of a bankruptcy filing, the chiefs of the two departments said Thursday.

But they will continue to protect the city, Police Chief Rob Handy and acting Fire Chief Paul Drasil emphasized at a press conference Thursday.

"We have 458 qualified men and women with a very strong tradition of honor, integrity and service," Handy said. "That will continue." 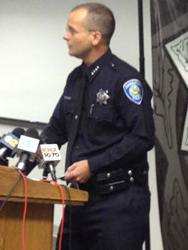 The Police Department is designed for about 500 employees, but is down to 458 - 289 of them sworn officers - he said, and he expects the future to bring more departures and no hiring.

But he also said his officers can do the job, and said the depleted staffing levels were "almost identical" to what the Police Department had in the early 2000s, when crime levels were higher.

Police ranks will likely decrease, he said, as officers retire or transfer to other departments.

Asked whether city should contract out services, as some on the city council have suggested, Handy said he's not a policy maker. He went on to say that protecting the city from crime and fire was "complex" because of the city's demographics, aging infrastructure and crime rate.

The Fire Department was also hit by a reorganization the City Council approved July 2, which will save the city an estimated $50,000 by eliminating the cadet program and reassign the deputy chief, division chief and fire marshall to shift duty, Drasil said.

"I have some concerns about that," Drasil said, saying it made administration more difficult.

The Fire Department was fortunate to receive a SAFER grant to help pay for firefighters, Drasil said, and any layoffs would violate the terms of the grant.