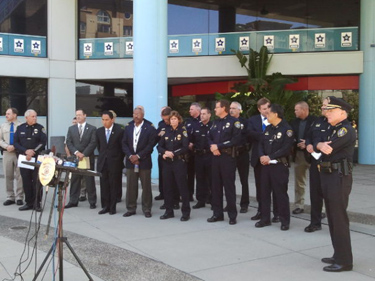 Henwood, 36, a four-year veteran of the police department, was also a captain in the Marine Corps Reserves, and had recently returned from deployment to Afghanistan.

The shooting followed a series of tragedies and scandals that have hit the highly regarded San Diego Police Department in recent months.

On Aug. 1, officer David Hall, 41, a 14-year veteran, committed suicide at his home. He was facing criminal charges of drunk driving and hit-and-run driving in an off-duty incident.

On July 18, detective Donna Williams, 52, a 31-year veteran and mainstay of the child-abuse unit, was stabbed to death in her home, along with her 18-year-old daughter Briana. Williams' 24-year-old son Brian, suffering from mental illness, has been charged.

And on Oct. 28, officer Christopher Wilson, 50, a 17-year veteran, was fatally wounded while assisting officers in a late-night probation check on a drug suspect in the Skyline neighborhood. Three people have been charged with murder in his death.

The department also has been struggling with alleged incidents of officer misconduct, including allegations of rape, spousal abuse, stalking and excessive force. Four of 10 high-profile allegations involve on-duty conduct.

In response, Lansdowne, chief of the 1,800-officer department since 2003, has instituted a series of measures, including a hotline for citizens to report abuse allegations, training for supervisors in "early intervention" with troubled officers, and an effort to improve psychological screening for officers.

Police said Saturday's incident started when a suspect, identified as Dejon Marquee White, 23, used a shotgun to shoot a man who was sitting in a car in the parking lot of a fast-food restaurant in neighboring El Cajon. A motive for that shooting has not been disclosed; the victim is expected to survive.

Moments later, the same gunman allegedly pulled beside the San Diego officer's patrol car at a stop sign in the blue-collar City Heights neighborhood and shot him "absolutely unprovoked," according to Capt. Jim Collins of the San Diego department's homicide squad.

As the officer was rushed to a hospital emergency room, dozens of officers from several departments, responding to the radio call of "officer down," located the suspected gunman outside an apartment building. When he reached for a shotgun, several officers opened fire, killing him, Collins said.

For several hours, police surrounded an apartment building, believing a second suspect was barricaded inside. Finally forcing their way into the apartment, SWAT squad members found no one.

Henwood's name will be added to a monument in front of police headquarters that lists 31 officers killed in the line of duty since 1913.