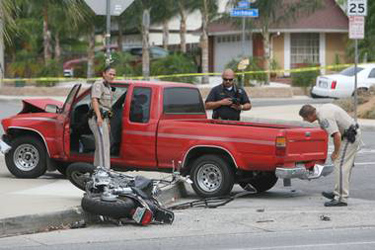 A Moreno Valley man who died early Thursday, July 12, when his motorcycle struck a pickup that made a left turn across the motorcycle's path, was a dispatcher for the Riverside County Sheriff's Department.

Dominic Durden, 30, has worked at the sheriff's Riverside dispatch center for the past six years, said sheriff's Sgt. Lisa McConnell, spokeswoman for the department, in an email.

The driver of the pickup, Juan Tzun Lopez, 24, of Riverside, is being investigated for vehicular manslaughter without negligence, said Officer Steve Carapia, spokesman for the Highway Patrol's Riverside office. Lopez is not licensed to drive, Carapia said.

The Riverside County coroner's office said Durden was wearing a helmet at the time of the collision.

About 5:45 a.m., Lopez was driving a red 1989 Toyota pickup about 50 mph north on Pigeon Pass Road north of Highway 60, when he attempted to make a left turn onto Chambray Drive.

Durden was southbound on Pigeon Pass in the left lane traveling at 40 to 45 mph when Lopez turned in front of him. The motorcycle collided with the pickup, throwing Durden to the road. He was pronounced dead at the scene.

Pigeon Pass Road was shut down at Hemlock Avenue for the investigation.