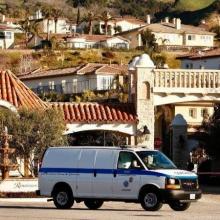 Police on Tuesday publicly identified three men who were shot to death recently in the Renaissance gated community on the border of Porter Ranch and Chatsworth.

Gary Davidson, 39, a renter in the house where the shooting erupted; Benny Lopez, 46, of Anaheim; and Jesus Perez, 45, of Perris, all died of gunshot wounds on Monday afternoon. The men likely knew their killer or killers, according to LAPD Capt. Billy Hayes of the Robbery-Homicide Division.

“We have determined this is not a random act,” Hayes said.

A woman in an upstairs bedroom said she heard what sounded like gunfire around 3:45 p.m. Monday, Hayes told reporters. The woman said she knew Davidson, but not the other victims.

After failed attempts to communicate with Davidson, the woman called police, Hayes said.

LAPD officers arrived at the affluent gated community at 3:52 p.m. and the victims were pronounced dead at the scene.

“We do have an idea of what transpired and why it transpired,” Hayes said, but declined to elaborate. He did say, however, that the shooting was not the result of a failed burglary attempt.

There appeared to have been some sort of struggle in the common area of the house, Hayes said, but no sign of forced entry. Hayes said that since visitors must secure permission from a resident to enter the community, it's clear the suspect or suspects had permission to enter the house itself.

Renaissance has two gates. One is automated and requires a security tag and the other is staffed by security guards.

The house where the shooting occurred is a five-bedroom, 4,700-square-foot residence in the 20300 block of Via Galileo. The home sold for $1.45 million in 2004, according to the real estate website Redfin.

Rep. Brad Sherman, who represents parts of the San Fernando Valley, including Porter Ranch, lives within four blocks of the scene.

Sherman said he was home celebrating Presidents Day at the time, but that he didn’t learn of the killings until later.

“It's a reminder that things can happen anywhere, even in Renaissance,” Sherman said. “I think it's good for all of us who live there that there's a very visible police presence.”

Kiran Kamat, a doctor who lives in the neighborhood, said he was at work when the shooting happened, but that his wife texted him about it before he got home. He said she had seen the area cordoned off with yellow tape, and saw a woman sitting on the curb wrapped in a blanket just a few minutes after the shooting.

“It was very shocking because I live on the same street,” Kamat said. “It's a gated community and it's supposed to be secure.”