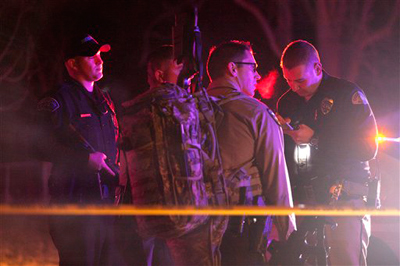 Police officers and emergency crew are seen near 3268 Jackson Street in Ogden, Utah where 6 police officers were shot, including those from the Weber-Morgan Narcotics Strike Force and the Ogden Police Department, while serving a warrant Wednesday Jan. 4, 2012. The suspect was also shot. (AP Photo/Erin Hooley - Standard-Examiner)

OGDEN, Utah (AP) - One officer was killed and five other drug task force members and a suspect were wounded in a gunfight Wednesday evening while serving a search warrant in an Ogden neighborhood, authorities said.

Ogden police said in a statement early Thursday that the agent who died from his wounds was Jared Francom, a seven-year veteran who is survived by his wife and two young children. Five others officers from multiple agencies remained hospitalized with serious to critical injuries. No more information on their conditions was released.

The sole suspect in the drug-related shooting was at a local hospital under guard, with non-life threatening injuries.

No other names have been released.

The shooting occurred as an anti-drug strike team was serving a warrant. The Standard-Examiner in Ogden reported that more police responded upon word of at least one officer shot.

Police blocked off the area from 34th Street and Jackson Avenue to 32nd Street and a SWAT team took positions in that area of Ogden, which is about 35 miles north of Salt Lake City.

Authorities have not released information on how the officers and the suspect were shot. The newspaper reported police eventually surrounded the suspect near a backyard shed. The residence was secured after the arrest, and at 9:45 p.m. police announced there was no longer a threat to the community, the paper reported.

Four of the officers were taken to nearby McKay-Dee Hospital. Several off-duty doctors and nurses were called in to help with the situation, according to hospital spokesman Chris Dallin, who said he couldn't provide information on the officers' conditions and didn't know where the suspect was being treated.

Witnesses said they heard three quick pops followed by a two- to three-minute pause, then lots of gunfire.

"We came running outside to see what was going on," Janessa Vanderstappen, who lives nearby, told the Deseret News. "Officers told us to go back in our house."

Vanderstappen said she went back inside, and minutes later heard yelling coming from the backyard. She said she walked onto the back porch to see officers addressing a person hiding in a nearby shed.

Mat Weinberger, who lives about a half block from the scene, said he first thought the noise was fireworks.

From the porch, he told the Salt Lake Tribune that he could see several police cars parked at a nearby intersection. He also could hear a voice on the police radio shout that an officer was down.

He estimated that between 30 to 40 shots were fired during the shootout.

"Chaotic end to a quiet night," he said.