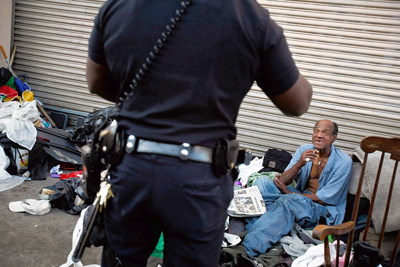 A Los Angeles police officer speaks to a man on skid row sitting among the kind of items that the city's Safer City Initiative had largely cleared from the sidewalks. (Barbara Davidson / Los Angeles Times)

As evening falls, a dazed woman with a gangrenous thumb spreads a blanket over a row of plastic crates to make a bed on the urine-soaked sidewalk.

As many as 10 people are camping along this stretch of pavement on 6th Street in downtown Los Angeles. Their belongings - tents, sleeping bags, shopping carts, a leather chair, at least two microwaves and piles of clothing - nearly cover the concrete. Rats scuttle in the gutter. A bony man lights up a crack pipe.

Scenes like these had all but disappeared several years ago when the Safer City Initiative brought 50 additional police officers to the 50 gritty blocks known as skid row. Crime rates dropped, homeless encampments were cleared and the street population shrank.

Now the pendulum is swinging back.

"We nearly had demolished the skid row of old," said the Rev. Andrew Bales, who heads the Union Rescue Mission on San Pedro Street. "It's right back to what it was."

The latest setback in the city's efforts to clean up skid row is a reminder of how intractable the homeless problem remains, even as gentrification has brought luxury lofts and trendy restaurants to downtown neighborhoods. Although there is debate about the reasons, most agree that the prolonged economic slump is a major factor.

Los Angeles police officers perform monthly counts of the people they see sleeping on the sidewalks. According to their figures, the skid row street population fell from 1,876 in September 2006 to 721 the following March - driven to other communities, according to activists.

For the most part, the count remained below 800. But as the economy continued to sputter, advocates for the homeless say, more people exhausted their resources, and funding was cut for many of the programs that help keep people off the streets. By December, the number of people on neighborhood streets had swelled to 1,693, even as homeless figures fell across the county as a whole.

The Safer City strike force remains in place but has repeatedly faced charges that its tactics amount to the criminalization of homelessness. One of the tools the city used was to remove unattended items to keep the sidewalks clear.

But a federal court ruling last year blocked that.

LAPD Lt. Shannon Paulson, who is in charge of the Safer City Initiative, said that as the streets became more cluttered, they became harder to police. At the same time, she said, jail budget cuts were forcing the early release of drug dealers, pimps and thieves who prey on the neighborhood's vulnerable residents.

Last month, Deputy City Atty. Amy Field asked the U.S. 9th Circuit Court of Appeals to overturn the court ruling on the grounds that "no one, rich or poor, has ... the constitutionally protected right to turn the public sidewalk into their own personal storage facility."

U.S. District Judge Philip S. Gutierrez had issued the order after eight homeless men accused police and street-cleaning crews of seizing and destroying possessions that had been left unattended while they used a restroom, filled water jugs or appeared in court. Some returned in time to see their belongings dumped out of shopping carts and crushed in a skip loader, according to the complaint.

Standing at 5th and San Pedro streets, a man who would identify himself only as Wayne said the same thing happened to him while he was showering at a mission last year. "They took all my blankets, all my clothes, my tent, important papers.... It's almost like you're crawling down in a hole and they are kicking you back."

Becky Dennison of the Los Angeles Community Action Network, which has long clashed with city officials over the tactics used to clean up skid row, said the court order does not prevent city employees from removing items that have been abandoned, present a health or safety risk, or are evidence of a crime or contraband. She accused the city of deliberately allowing conditions to deteriorate to bolster its case against the injunction - a charge rejected by city officials.

"A lot of people suffer from mental illness and they hoard stuff they don't need," said Officer Deon Joseph, who serves as the LAPD's community liaison on skid row. "I have tried to pick stuff up, but people tell me it belongs to someone else."

If items are seized, the injunction says they must be held for 90 days -an impossible task according to Joseph because of the volume of material that accumulates on some sidewalks.

One recent afternoon, he approached a man sitting on a pile of clothing, reading a newspaper. Joseph wanted to know what a couple of wooden chairs and a broken door were doing on the sidewalk. The man, who gave his name as James McDaniels, said he was a "furniture fanatic."

Joseph said the injunction was making it harder to persuade people to move into shelters, where they can get treatment and counseling. And "as the aesthetics go down, the crime goes up," he said, citing the "broken windows" theory on which Safer City is based.

Although police say the streets are still safer than they were before the initiative began in 2006, thefts are up 46% over last year. They believe that is partly because there are more things there to steal. And that can lead to fights.

Residents too have noticed a change.

"This ain't nothing but a health hazard," grumbled a man who goes by Socks, as he marched down 6th Street carrying three bulging trash bags and a plate of food. He used the street because the sidewalk was too cluttered.

On San Julian Street, drug dealers and their clients congregate near the entrances to rehab programs. Nearby vendors have stacks of pornography on display, along with syringes and glass tubes used to make crack pipes.

"It was already an intimidating environment," said Donna Gallup, executive director of Lamp Community, which offers housing and treatment for the mentally ill. "But now with the deterioration of conditions, it really does interfere with access to services. There's more people, more garbage. It doesn't feel safe."

Over on Crocker Street, workers at Volunteers of America say they can no longer get mail delivered. "The post office says they won't walk through that gantlet," said Bob Pratt, who heads the group's L.A. affiliate.

Private security workers with the Central City East Assn., which represents business and property owners, made 72 calls for police assistance and 20 calls for paramedics in January and February. That is eight times the number of calls made in the same period last year, according to the association. Reports of abandoned property and homeless encampments have doubled.

"This is not one giant homeless shelter," said Estela Lopez, the association's executive director. "Skid row is also part of L.A.'s industrial core.... These people are coming to me and asking, 'At what point am I just crazy to stay and do business here?' "