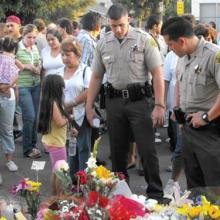 LAPPL Board of Directors

The playful sounds of small children strongly contrasted the somber mood of residents on Monday night as they descended upon a Cypress Park street corner where a Los Angeles County Sheriffs Deputy was gunned down Aug. 2.

The 27-year-old deputy was killed outside his parent's home early Saturday morning as he prepared to go to work at the Men's Central Jail in Downtown Los Angeles. LAPD Detectives are heading the investigation, which is being approached from a number of different angles, according to media reports.

Andres Catalan, pastor of Prince of Peace Church, located one block away from where the shooting occurred, led the hour-long vigil. Among the city officials who spoke were Ed Reyes, the city councilman for the Cypress Park area, the Rev. Leonard B. Jackson, senior advisor to Mayor Antonio R. Viallaraigosa as well as firefighters who responded to the shooting.

Reyes promised the residents that the killers would be caught.

"We're going to get you," Reyes said. "We will have justice."

The vigil served as a forum for community leaders to urge residents to overcome their fears and come together in order to prevent gang violence from taking over the troubled neighborhood.

Jackson urged residents to go back to their community and to speak with their clergy. He said although they will never get over this tragedy, together they would get through it.

The message of residents embracing the clergy coincides with new efforts by Capt. William Murphy, commanding officer of the LAPD's northeast division, to utilize church officials in efforts to combat gang violence. Murphy is in the midst of training local religious leader to form a crisis response team. As part of the official LAPD clergy council, religious leaders will form a bridge between residents and the police department, Rev. Randy Carrillo, president of the Churches of the Northeast said.

Carrillo said residents who may hesitate to talk to police in the northeast area for fear of gang retaliation might choose to talk to their pastors instead.

The clergy council, formed by Murphy and Sgt Danny Roman, community relation's officer for the LAPD's northeast station, is part of an effort to build a personal relationship between residents and the police.

Murphy said his goal with the council is for residents to feel better and more comfortable talking to police. The police captain has vowed to march with local residents during a peace march scheduled for Aug 16.

The anti-gang violence march, headed by the coalition of local churches, has been in development for the past four months, and is in response to a number of high profile crimes in the area this year. Before the killing of Escalante, the area had been relatively quiet since a series of multi-agency raids headed by the Department of Justice and the LAPD were conducted last June.

During a community meeting with Cypress Park residents on July 29, Reyes said that 61 of the 71 suspects arrested during the raids were in custody on state and federal charges. He said none of them would get out on bail and that they will serve 85 percent of their time in federal prisons.

During that meeting, residents expressed concern over lighting and cameras for certain streets in their neighborhood. Less than a week later, a deputy was killed near the streets they named. The murder of Escalante, a husband and father of three, is particularly difficult for residents to deal with, because in the area where it is common for young men to end up in jail or in a gang, he chose a life of public service. Escalante was a U.S. Army reservist and had served as a deputy for two and a half years.

Gus Lizarde, president of the Greater Cypress Park Neighborhood Council, said there is a lot of fear and anger in the community.

"We're upset because we lost a young man who wanted to grow up and he was taken away from us," Lizarde said.

"We feel like we are losing the battle." Lizarde said on the night that Escalante was killed. the Saturday Night Lights Program at nearby Cypress Park was empty.

The program is part of a citywide effort to combat gangs by keeping parks open till midnight four nights a week during the summer. He said there have been enough meetings between the community and the police. "They know what's going on," he said. "It's time for the LAPD to do their job."