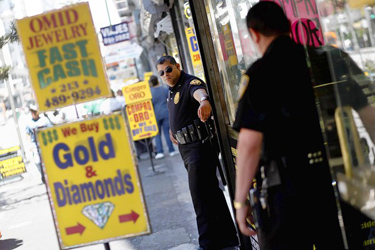 That stunning rise in the price of gold is having a ripple effect: A rash of jewelry store robberies, street muggings and home burglaries. Now, merchants are stepping up security and police are warning everyone against flaunting their bling.

When Capt. Mark Olvera, who runs the LAPD's Newton Division, spotted a beefy man with a gold chain around his neck the other day, he worried the guy might become a victim. "He looked like he could take care of himself," Olvera said. "But that's a couple thousand dollars ... on him."

So far this year, gold chains have been snatched from the necks of at least 110 people during street robberies in Olvera's South Los Angeles division. His officers are circulating fliers and showing up at churches and community centers to warn residents to stop wearing gold in public, or at least to tuck it under their clothes.

"It's easy money. It's easy to get, and it's easy to get that gold fenced. You see all the ads, 'We buy gold,'" Olvera said. "They sell it, melt it down and there's no regulation."

Gold jumped to a record $1,818.90 an ounce Thursday, nearly double its value two years ago. That's made simple gold chains, watches and rings worth hundreds or thousands of dollars.

In downtown L.A.'s jewelry district, a series of brazen store robberies has created an air of tension. Stern-faced security guards stand outside some shops, arms crossed, pistols on their hips.

At 7th Street and Broadway, Bahram Zendedel was perched on a stool outside his store, Triplets Jewelry, watching every passing car with a gimlet eye.

Zendedel said he has been robbed twice in the last six months because of skyrocketing prices of gold, silver, platinum and other precious metals - traditionally safe-haven investments in uncertain economic times.

In one case, he said, a robber posed as a customer - trying on a gold chain, a gold watch and a gold bracelet. He then ran off with all three items, which Zendedel valued at $65,000. The merchant said he gave chase, but wasn't fast enough.

Since then, Zendedel has closed one of the store's two entrances and he's opening two hours later each morning, hoping that busy streets will discourage theft. He also stays glued to his stool out front.

"That's why I'm sitting outside," Zendedel said. "I have to watch any cars that come by, looking for gang members."

In some cases, the robbers are turning violent. On Tuesday night, three men robbed a Koreatown jewelry store and beat a security guard with a hammer. Last month, robbers stormed into 21st Century Jewelry in downtown L.A., doused the owner with pepper spray and made off with thousands of dollars' worth of gold-plated jewelry.

Police are recommending that jewelers keep display cases inside their stores and hire extra security. The owner of 21st Century said he wishes he could hire guards, but he can't afford it. He declined to give his name, saying he didn't want to become a target.

"Some stores have been robbed two, three times," he said. "I believe it's possible to happen again."

The LAPD has investigated 10 smash-and-grab robberies in the downtown jewelry district so far this year, said Lt. Paul Vernon, who oversees the LAPD's Central Division detectives unit. They've made about a dozen arrests.

"It's primarily based on the price of gold, because we didn't see this as much before last year," Vernon said.

Criminals are also targeting cash-rich gold buyers, setting up appointments to sell gold but then robbing buyers at gunpoint when they arrive, police said.

Erin Stevenson of Long Beach, who organizes gold-buying parties, takes a series of precautions to avoid becoming a victim.

Stevenson's events are something like Tupperware parties in reverse. People come to sell their gold jewelry. Stevenson values the items, buys them and gives the party host a cut of the action.

Some nights, she walks away with thousands of dollars in gold. She takes care not to advertise that fact.

"We don't do self promotion," she said. "I don't have on my car, 'I buy gold.' Why would you do that? You could be followed. The only people who know about it are the people I'm buying gold from. I always discourage the party hosts from putting it on Facebook. You don't put fliers around town. You don't want an unknown person showing up at your gold party."

What makes the crimes even more profitable is that stolen gold can be quickly unloaded at gold-buying shops, the evidence melted into bars before police can track it down.

About $1.53 billion worth of jewelry and precious metals was stolen in the United States in 2009, the most recent year for which data is available, according to the FBI. That was a 25% increase from 2006.

Meanwhile, police departments around the country are reporting an increase in gold-related crime. Some local jurisdictions are trying to make it harder to fence stolen gold.

Officials in Cherokee County, Ga., passed an ordinance in May that requires gold buyers to fingerprint anyone selling gold and send their names and personal information to the sheriff's office.

"Gold and jewelry don't have serial numbers. It's very easy to sell," said Cherokee County Sheriff's Lt. Thomas Pinyan. "This system will show us who the people most frequently selling gold and gems in Cherokee County are. And those could be people we are wanting to investigate."

In L.A.'s jewelry district, Zendedel hopes his extra security measures will make his store less of a target. But he thinks gold-related crime will continue to grow as long as an uncertain economy keeps people out of work - and as long as the price of gold keeps soaring.