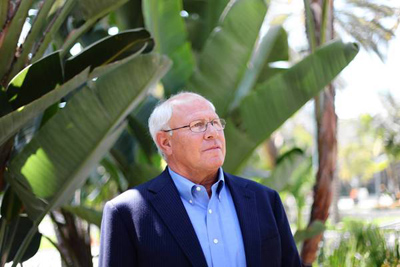 Steve Soboroff did not wait long before making his presence felt in the Los Angeles Police Department.

About 2 1/2 minutes into his opening remarks after he joined the city's Police Commission and was elected as its president, Soboroff called bluntly for the department to outfit officers with small video cameras that attach to their uniforms and would record potentially controversial encounters.

The comment, Soboroff acknowledged afterward, was a deliberate nod to the department's decades-long, and still unrealized, effort to equip its patrol vehicles with video cameras that would serve a similar purpose as the body-mounted cameras. In an interview with The Times, Soboroff explained his plan for the cameras further, saying that he believes he can convince private donors to buy the cameras for the department - an unorthodox strategy that, if successful, could bypass much of the city's bureaucracy, internal politics and budget constraints that have hampered the LAPD's in-car camera project over the years.

Although it was only his opening gambit as a commissioner, Soboroff's call for the cameras seemed to signal a departure from his predecessors, who brought a more passive style to the post or, at least, opted to wield their authority more quietly and behind the scenes.

"I absolutely plan to bring a new approach to this job," said Soboroff, a wealthy businessman. He added that his experience pushing mega-projects such as Staples Center through the city's bureaucratic and political machines has given him an understanding of how to get things done within the city's government.

"If I see something that troubles me, I am going to jump in on it," he continued. "It's important that we're aggressive and transparent in dealing with issues. And we will be. "

Mayor Eric Garcetti appointed Soboroff to the commission after an election campaign in which Soboroff was a powerful supporter.

Garcetti appointed three others to the commission who also took their seats on the volunteer board for the first time Tuesday. They are: Paula Madison, a former journalist and media executive; Kathleen Kim, a law professor; and Sandra Figueroa-Villa, the executive director of a nonprofit community group. Garcetti kept on one current commissioner, Robert Saltzman.

Before the newly constituted commission's first meeting, several sources said, Garcetti discreetly made it known to commission members that he wanted Soboroff to be elected as president - a role that will give him greater ability to influence how the commission goes about its job and the issues it focuses on. Madison was elected vice president.

Soboroff said the idea for the cameras came out of a series of meetings he's had in recent weeks with police and elected officials, union leaders, and a range of LAPD observers. Many of the people, he said, cited the department's failure to fully outfit its vehicles with cameras as a pressing, frustrating problem.

Having an audio and video recording of traffic stops, shootings and other encounters is seen as a valuable and cost-saving tool in guarding against misconduct and absolving officers when they are falsely accused of wrongdoing. LAPD Chief Charlie Beck, Soboroff said, was among those who voiced strong support for the idea of cameras and expressed concern about the slow pace of installing them in cars.

The push for cameras in LAPD vehicles dates to the 1991 beating of Rodney G. King. Over the years that followed, the department's commitment to the idea has waxed and waned. The latest go-round began in 2008, when the City Council earmarked enough money for cameras in about a quarter of the LAPD's 1,200 patrol vehicles. Police officials announced plans to complete the job in the subsequent few years, but five years later, only that first quarter of vehicles has cameras.

As video technology has progressed, police departments have looked increasingly beyond in-car cameras, which capture only events that occur in the front of the vehicle, and opted to put audio or video devices on the officers.

Soboroff said he didn't want his plan to interfere with the department's ongoing efforts to get cameras into more patrol cars - at least not until it is clear whether the body cams can replace in-car cameras or augment them. He emphasized that he expects to leave the particulars about the plan - for example, what type of equipment to use - to experts in the department.

After Tuesday's meeting, Soboroff said, he met with members of the LAPD's technology unit to discuss the idea. They sketched out a rough timeline, he said, in which a few dozen officers would first test the body cameras for a few months, followed by a larger pilot program involving several hundred cameras being tested over a few years. He estimated that it would cost about $900,000 to complete the pilot program - an amount that he said he is confident he can raise from donors he declined to identify.

Soboroff said about 1,500 cameras would be needed to outfit the patrol officers on duty on a given shift throughout the city. He said he hopes the pilot program would demonstrate that the cameras are a smart investment. But even if city officials balked, Soboroff said, he thought he could raise the money needed to purchase all the cameras.