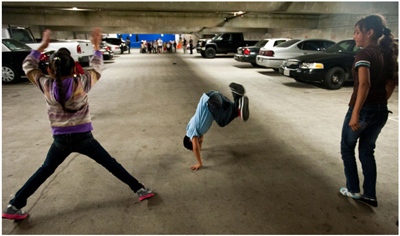 Kids do cartwheels after running during an exercise drill. The Newton Division Police Activities League also offers martial arts, boxing, yoga, and gardening, among many other activities for kids in the community. (Maya Sugarman/KPCC)

The makeshift training area underneath the LAPD's Newton Division isn't much. That's because it's also the police station's underground parking garage. Among the police cruisers, there's a big mat, a couple of punching bags and assorted strength-and-conditioning equipment.

"OK, you're going to do a sit-up and touch your toes, all right?" he yells to a group of about 20 children. They're all lined up around a mat, waiting for his instructions. When he says go, some kids yell enthusiastically, while others collapse in a fit of giggling.

It's not the crowd Teasdale is used to working with. The 30-year-old physical fitness instructor owns a Crossfit gym downtown.

"Crossfit is a methodology that tries to get people as fit as possible," he says. "So we do varied movements, varied time domains and varied intensities; we do different stuff every single day, pretty much. If you see our gym, there are rings hanging from the ceiling, ropes, tractor tires."

But right now, Teasdale isn't at his downtown gym. He's with the young participants of Newton's Police Activity League (PAL). For these South L.A. children, PAL is the only activity they have besides school.

"We're teaching the kids movements necessary for life," said Teasdale. "That's the same thing we do in our gym. At PAL, though, we're in the bottom of a parking garage and we don't have all the equipment necessary to do that. But we make do with what we have."

Each LAPD division has its own PAL program, and Newton's, like many others, relies on volunteers. It's not just Crossfit; there are other organized physical activities, as well as tutoring and field trips. For most of the kids in the neighborhood, none of that would be possible without PAL.

Newton officers in charge of the program solicit contributors who can donate their time or supplies - like they did with Teasdale back in February. They just wanted to see if he could spare any equipment, but Teasdale offered himself. At his gym, he says, he sees all kinds of people, especially since he's surrounded by downtown's bars.

"On a daily basis, I see what I don't want kids to grow up to be," he says. "To be able to be a positive influence and get their minds focused on healthy habits is a good thing."

Robert Sale, who trains amateur and professional boxers, also volunteers with the program. Every Saturday, in the same parking garage, he teaches the kids to box.

"This sport, specifically boxing, is connected to the lower socioeconomic stratified community," he says. "It's always been that way because it's a rugged, tough sport. It requires a lot of self-discipline. It's just a tough sport."

Sale, 45, started volunteering as a favor to an LAPD buddy. Now, he calls it the most rewarding part of his personal life, and like Teasdale, doesn't charge or demand anything in return for his time.

"Those kids really, really, really appreciate the time, the investment," he says. "There's so little for them down in that community. In all seriousness, I consider myself the beneficiary of this program, to be permitted to be involved in [the] program."

For his part, Teasdale considers himself a "serviceman," and says since he has a gym full of people that pay him, he doesn't need anything from the kids.

"I really just want to do it," he says. "It just seems right to me. There was never a mentor that I had, and [now] I'm kind of paying back the system - that's not the case. I just like it."