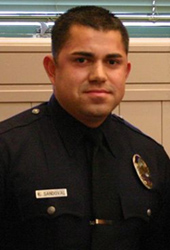 Officer Kevin Sandoval when he was sworn in two years ago. (Photo: South Pasadena Police Department)

A South Pasadena police officer died Tuesday after suffering a head injury during a training exercise at a firing range in Azusa, authorities said.

Officer Kevin Sandoval, 23, was with other South Pasadena Police Department officers at the Burro Canyon Shooting Park when he collapsed shortly before 2 p.m and hit his head, officials said. He was given first aid at the scene and flown to Foothill Presbyterian Hospital in Glendora, where he was pronounced dead.

It was unclear why Sandoval collapsed, said Officer Ming Hsu of the California Highway Patrol, which was handling media inquiries for the department.

Sandoval, a Covina resident, had been an officer in the department for two years. Prior to that, he was a cadet, Hsu said.

Sandoval is survived by his mother and father, and a sister.