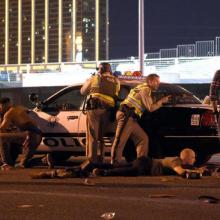 Several police officers from California and Las Vegas were among those injured in a deadly shooting Sunday night, Above, officers and others seek cover among the gunfire. <em>((David Becker / Getty Images))</em>

Multiple police officers, both on and off duty, were among those killed or injured after a gunman opened fire Sunday night at a country music festival opposite the Mandalay Bay Resort and Casino on the Las Vegas Strip, officials said.

One off-duty officer from the Las Vegas area died, while two others who were on duty were wounded by gunfire, said Clark County Sheriff Joe Lombardo. Of the two wounded, one is stable after surgery and the other sustained minor injuries, the department said.

Many off-duty police officers and deputies from Los Angeles and Orange counties, Bakersfield and other areas were at the Las Vegas show.

A Los Angeles police officer was among those wounded, the department said early Monday.

“While that officer is expected to make a full recovery, it is still unclear who else may have been injured trying to get to safety,” the department said. “We are still in the process of attempting to contact any additional LAPD employees who may have been at the concert and have a team in Las Vegas to help coordinate that effort.”

They were expected to survive.

“Our officers were actually attending the concert as civilians,” said Burdick, adding that the agency has accounted for every officer known to be there. “Keeping our fingers crossed that that’s good info.”

Two employees with the Los Angeles County Sheriff’s Department were struck by gunfire, the agency said. One was critically injured while the other is stable.

Gracia’s wife was also hurt during the incident but her injuries were non-life-threatening.

"Please keep Officer Gracia and his family and the families of all of the victims in your thoughts and prayers," the department said in a statement.

“The loss of life in Las Vegas is profoundly horrifying...Our hearts are heavy today — and our thoughts are with the victims of this senseless attack, their loved ones, Mayor Goodman, and all of our friends in that great city,” Garcetti said. “My prayer is that they find healing, recovery, and strength in this moment of indescribable pain.”

None of the officers was identified.

Authorities said the shooter fired from the 32nd floor of the Mandalay Bay hotel. He was identified as 64-year-old Stephen Paddock, a resident of Mesquite, Nev. He was found dead of a self-inflicted gunshot wound after a SWAT team burst into the hotel room from where he was firing at the crowd, authorities said.

The shooting claimed the lives of at least 50 people and left at least 515 others injured.