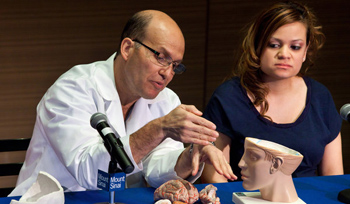 The wild swing connected to the left side of the police officer's head, a presumed punch until the blood started flowing. The officer, Eder Loor, reached to his temple and felt the handle of a knife.

He pulled the knife out, his wife later learned, not realizing then just how seriously injured he was.

By any odds, Officer Loor should have been killed or left brain-dead by the knife that entered his skull on Tuesday, after a confrontation with a 26-year-old ex-convict in East Harlem. At best, he could have lost the ability to speak, to talk to his pregnant wife or young daughter.

The head of neurosurgery at Mount Sinai Medical Center, Dr. Joshua B. Bederson, said Wednesday that none of that would come to pass.

"He is probably the luckiest unlucky man you could ever have," Dr. Bederson said at a news conference in New York.

"It was a millimeter from everything; it was ridiculous," he said later in an interview. "You don't want to overemphasize, but he was at death's door. He was minutes away from crashing."

Officer Loor's wife, Dina Loor, sat beside the doctor at the news conference, a picture of unfailing calm and poise. She answered questions in English and Spanish as she spoke of her husband's first words to her, and of how he never showed fear, much as she hid her concerns from their daughter. 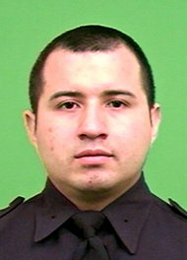 The news conference, which was also attended by the officer's sister, was a vast departure from what typically follows a near-fatal attack on a police officer: Information is guarded, and loved ones seek privacy at a critical time. It also offered a welcome juxtaposition with the scene at Woodhull Medical Center in Brooklyn this week, when Mayor Michael R. Bloomberg delivered the news that Lt. Richard A. Nappi of the Fire Department had died while fighting a blaze.

Throughout the news conference at Mount Sinai, it was made clear that Officer Loor, 28, was fortunate not to have met the same fate.

Officer Loor and his partner, Luckson Merisme, were responding to an emergency call by the mother of an emotionally disturbed man, Terrence Hale. The mother, Vearry Hale, had called 911 to say her son was bipolar and had stopped taking his medications. When the officers met her outside, she said her son was upstairs and needed to go to the hospital, the police said.

The officers strode into the Franklin Plaza Apartments, a housing complex at 1945 Third Avenue, near 107th Street. Mr. Hale exited an elevator in the lobby and walked past them as his mother asked him to go to the hospital, according to an account given by the police commissioner, Raymond W. Kelly.

Mr. Hale responded, "I'll go by myself," and then walked out the door.

The officers caught up to him and said they would escort him there, the police said. It was then that he suddenly produced the knife and stabbed Officer Loor, they said.

By Wednesday evening, Mr. Hale had not been arraigned on charges that included attempted aggravated murder. He had been arrested in the past, the authorities have said, including for a knife attack in 2006, for which he served a term at Sing Sing.

In a brief telephone interview on Wednesday, his mother said she was angry because she had called for an ambulance to help him, and not for the police. She also accused the police of mishandling the situation and displaying a lack of training for a sensitive domestic encounter, and said she planned to contact a lawyer.

"They did not get backup, and they did not do their job right," Ms. Hale, 51, said. "My son was not feeling well; he was sick and said he wanted to go to the hospital."

After the stabbing, a call for an ambulance was received at 10:32 a.m. on Tuesday, and Dr. Bederson cited the quick work of the emergency workers in helping to save the officer. The doctor had moved fast, too: he had flown into La Guardia Airport from a conference in Florida that morning and was running in Central Park when the call came. He ran straight to Mount Sinai.

By the time Dr. Bederson arrived, the knife had been removed; the officer's wife said, "He pulled his own knife out."

"Since he's an E.M.T., he somehow managed to hold the pressure," Ms. Loor said. "Somebody on the street, I believe, handed him a towel."

Although Officer Loor was alert at first, Dr. Bederson said, he "rapidly deteriorated and was lethargic and sleepy." The officer was bleeding inside and outside the brain, he added, "and the hemorrhage was expanding and pressing on the brain." Doctors removed a bone flap, seven inches in diameter, from his skull and stopped the bleeding.

The knife, which entered just behind the officer's eye, went "deep into the temporal lobe and all the way down to the skull base," the doctor said.

It cut through the Sylvian fissure, which separates the frontal and temporal lobes and contains major blood vessels. The knife cut the major vein of that fissure and nicked the middle cerebral artery that supplies blood to the brain's left hemisphere. It missed the carotid artery by a millimeter.

Officer Loor, who joined the force six years ago, is likely to experience a period of facial numbness and a depletion of energy, and will probably require some anti-epileptic drugs, but he is expected to "make a complete recovery," the doctor said.

In a lighter moment at the news conference, the doctor said he imagined a debate later with Officer Loor over when he would return to work: in one month, as the officer might prefer, or in three, under doctor's orders.

After the surgery, Ms. Loor, 25, said, she had brought their daughter, 4.5 , into Officer Loor's room for a bedside visit. The girl was happy "to see her dad," Ms. Loor said.

Their next child, a boy, is due in July.

As for her husband, she said, "all he wanted was a kiss."

Dr. Bederson, asked if he would call the officer's survival miraculous, said, "If you want to call that a miracle, I guess you're justified in calling that a miracle."