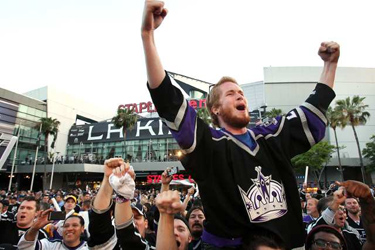 Mike Quigley, 22, of Garden Grove celebrates with a crowd of Kings fans after the team won Game 3 of the Stanley Cup finals Monday. (Christina House/For The Times)

Los Angeles Kings fans hoping to watch their team win its first Stanley Cup on Wednesday at Staples Center will be sure to see one thing: More security.

Both the Los Angeles Police Department and AEG, which owns both Staples Center and L.A. Live, have plans to amp up security efforts for the 5 p.m. game and any celebrations that might follow.

Capt. Horace Frank said the LAPD was encouraging celebration with any Kings victory but cautioned that the department would take a zero-tolerance policy toward lawlessness.

"We are going to have a very visible police presence in the area. We are going to facilitate that celebration with our presence," Frank said. "But the key is that fans celebrate responsibly."

As of Tuesday afternoon, LAPD sources said the only street closure planned was Chick Hearn Way, which runs through L.A. Live.

Michael Roth, AEG's vice president for communications, said officials had worked closely with LAPD to plan security for each of the games leading up to Wednesday.

"As the Kings have progressed in each round of the Stanley Cup playoffs, we have made adjustments to our security staffing and overall plans to account for more people inside and outside of Staples Center, and continue to do that as we now have the clinching game," Roth said.

The possibility of a Los Angeles team winning a championship game on home turf recalls images of burning cars and broken windows, damage done by crowds rioting outside Staples Center when the Los Angeles Lakers won their most recent championship in 2010.

Police officers donned riot gear and, in some cases, fired rubber bullets to disperse crowds. Multiple injuries were reported by the end of the night, but no loss of life occurred.

Roth said this time around there is "no concern whatsoever that we'll have any issues."

"This is an incredible moment for Kings fans and the city of Los Angeles," he said. "We believe fans can celebrate responsibly."