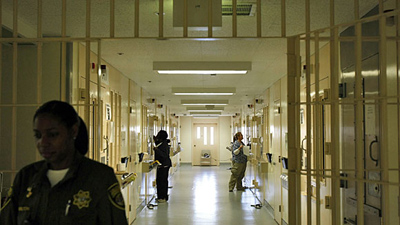 "At the start, every day ... there was a crisis," said Dr. Marvin Southard, director of the Los Angeles County Department of Mental Health. "There was somebody we didn't know what to do with."

In some cases, he said, released inmates have had to be immediately transferred to hospitals or residential centers for psychiatric care.

A new state law designed to reduce prison crowding and cut costs requires that certain nonviolent convicts serve their time in county lockups rather than state prisons. It also makes counties - rather than the state parole agency - responsible for supervising such inmates after their release.

The transition, called "realignment" by Gov. Jerry Brown, has raised well-publicized concerns among law enforcement officers across the state, as they try to accommodate more inmates in already crowded local jails. But realignment also presents less-visible challenges for local probation and mental health officials dealing with an influx of patients with drug and alcohol addictions, schizophrenia, bipolar disorder and depression.

Mental illness and drug addiction are common in California prisons, where more than half of inmates report a recent mental health problem and two-thirds report having a drug abuse problem, according to a Rand Corp. study. Many don't receive the treatment they need while incarcerated and may skip care once released, said the study's author, Lois Davis.

"If you have individuals struggling with depression and anxiety ... they are going to have a much harder time linking to services," she said. "It limits their ability to find a job and reunite with their family, and they will be at greater risk for recidivism."

Roughly 3,300 people have been released to Los Angeles County so far. The probation department is expecting about 6,000 more. County mental health officials estimated that about 30% will require mental health services and about 60% will have drug addictions.

Continuing treatment after inmates are freed is essential to preventing them from relapsing, having mental breakdowns, ending up in hospitals or landing back behind bars, officials said.

"We took it very seriously from the start," said Reaver Bingham, deputy director of the Los Angeles County Probation Department. "We knew that if we didn't address those risk factors, people would revert to what they know, and that is committing criminal activity."

Realignment, which began Oct. 1, has been bumpy. Many released inmates came without comprehensive medical records. It was up to the patients to pass along information about their diagnoses and medications to probation and mental health staffers. When county workers requested mental health records from the state, they often were told to get the information from individual prisons.

Communication has improved, but getting complete medical and mental health records remains difficult, officials said. One complication: Prisoners can block the transfer of records.

"A lot of it depends on the inmates' attitude at the point of the release - do they want to be treated more or to be left alone?" said Don Kingdon, deputy director of the California Mental Health Directors Assn.

Kingdon stressed the importance of counties having complete information on prisoners before they are released to local supervision. "That can create a problem in the community if they release prisoners and they have mental health needs and you didn't know," he said.

California prison officials "made a whole lot of effort to make the [transition] be as smooth as possible," said Denny Sallade, deputy director of the state's Division of Correctional Health Care Services. But inmates may be in one mental state when they leave the prison and another when they arrive in the community, often because they stop taking their medication along the way, she noted.

The inmates also may turn down help once they arrive. In Los Angeles County, about 30% of the released state inmates seen by mental health staff refused to either meet with clinicians or be referred for treatment.

But county officials are warning there may not be enough resources to accommodate former inmates in need of supervision. The state allocated $18 million to Los Angeles County to pay for mental health and substance abuse treatment and other social services. But the money isn't guaranteed to continue past June.

"Supervisor Mike Antonovich is very concerned about the inadequacy of realignment funding to effectively rehabilitate this population, which includes costly mental health services, housing and supervision," said his justice deputy, Anna Pembedjian. "It all boils down to resources."

Los Angeles, like most counties around the state, is already stretched thin after years of budget cuts and may not be equipped to close gaps in health and social services for the newly released inmates, said Davis, of Rand. To help defray some costs, counties across the state are working to enroll the eligible released prisoners in public programs such as Medi-Cal.

Counties are at the very early stages of understanding how to make realignment work, especially for those former inmates with mental illness, Davis said. "It is going to be a challenging time for the next couple years," she said.