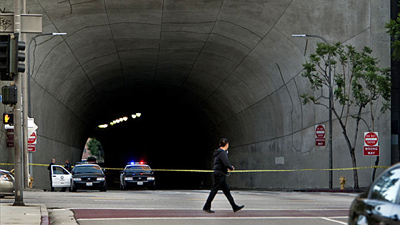 A newsroom has its own way of tracking a city's trend toward diminishing crime.

Twenty years ago, a reporter tallying crime stats for our newspaper's weekly blotter might sift through dozens of killings on a single weekend. There were more than 1,000 homicides a year. Last year, there were fewer than 300 homicides - and many weekends with no killings.

Ten years ago, reporters working the streets kept mental lists of neighborhoods considered too dangerous to visit alone. Now, no neighborhood is off-limits. That sense of ambient criminal menace is gone.

Los Angeles -- like other big cities around the country - is in the midst of a crime drop so steep and profound, it has experts scratching their heads. Crime fell in 2011 for the ninth year in a row, to levels not seen in Los Angeles since half a century ago.

The city had fewer crimes last year - and a million and a half more people - than it did when "Leave It To Beaver" made its debut in 1957.

The reasons are complicated and ripe for debate: better policing and more community involvement; fewer drugs and fuller prisons; an explosion in new technology; and the fading profile of violent gangs.

The phenomenon ought to be scrutinized. We need to know what mix of forces has conspired to drive crime down, so we can - in an era of shrinking resources - plan and spend wisely to keep this going.

We also have to ask ourselves: What will this transformation mean?

What will we do with all this safety in a city known not so long ago as the capital of drive-by shootings?

Statistics don't tell the whole story, of course. The stats show homicides, robberies and burglaries up in the city's downtown core. But that's an area bustling with activity in a way it's never been before.

The area's crime stats might have been better years ago, but downtown at night resembled a ghost town then. If you had to walk those streets, as I did, you felt a safety risk that couldn't be quantified numerically.

Now, I don't need to ask a security guard to watch as I make my way in the dark from the office to my car. Instead, I weave through groups of high-spirited, short-skirted young women, making their way to restaurants and bars.

The perception of safety is as important as statistics. That's what draws us out from behind locked doors and window bars; gives us license to walk our dogs, take our children to the park and trust our subways on a night out.

But it's the stats, city officials say, that promote civic pride and pay financial dividends through increased investment and tourism hikes.

"The numbers are mind-boggling," Mayor Antonio Villaraigosa told me. "You can walk down Main Street in the middle of the day or night. That's something we haven't seen in my lifetime."

Main Street is a downtown thoroughfare, once notorious for drugs and crime, now the scene of eclectic shops and busy restaurants.

Main Street might also be a metaphor, in Villaraigosa's eyes, for change that sweeps a city clean, across neighborhood lines and beyond demographic divides.

"In virtually every area of the city, crime is no longer the No. 1 concern," he declared. "We have the luxury of worrying about potholes instead."

The idea that we experience crime collectively is more myth than reality. Once you've been a victim, crime is high. Until then, you might leave your door unlocked.

Hollywood is certainly statistically safer than it was five years ago. But tell that to the family of John Atterberry, the record producer shot to death in his Mercedes last month by a man on a random rampage with a gun.

The subway is less risky than driving a car. But tell that to those Red Line riders who had to climb over the bloody body of a passenger stabbed to death on the train last fall.

Numbers are good at relaying trends; statistics telegraph our odds. And the numbers and odds of being a victim in this city still shift radically, tract to tract.

In my community, I worry more about coyotes than criminals when I'm out at night, walking my dogs.

And yet when I checked this week's stats on the crime mapping feature at The Times' website, there was my neighborhood, Porter Ranch, under the label "Violent."

We were at the top of a short list of spots with "recent significant increases in violent crime" - three slots above Watts. Last week, Porter Ranch had three violent crimes; our weekly average is 0.2. Watts registered 16 violent crimes; in a typical week it has 10.

Statistics catapulted us to the top of the "violent crime increase" pile. But the numbers illuminate the stark differences in crime. And people feel the disparity on both sides of the divide.

Auleria Eakins has heard reports of dropping crime, but "it doesn't click," she said, when she surveys her Vermont Square neighborhood in South Los Angeles.

She sees men pedaling along Western Avenue, dealing drugs from their bicycles. A woman wearing nothing more than "a g-string, bra and bright blond wig" strolling through the church parking lot. And "a motorcycle cop giving tickets to people trying to get their kids to school," while ignoring the prostitute on the corner.

But when she stops to think about it, Eakins says things are better. "I don't hear the helicopters as much," she said. There are fewer anxious nights, with spotlights trained on her backyard "making you think the [criminals] are out there, right on the side of your house."

And she sees more neighbors on the street when she walks her dog. Her co-workers laugh when she marvels at that. "They're from Montebello, where everybody's walking their dogs at all times of the day and night."

The change also plays out in suburban spots, but it's not through dogs and helicopters.

I put the question to my hairdresser, Alex, as he trimmed my bangs Thursday night in his shop at a strip mall in Chatsworth: Do you feel safer? He has been a crime victim, but he doesn't worry anymore.

He's not drawing on statistics, but on the luxury of something more personal:

The confidence that comes from not being dogged by worry that a stranger will knock you down and rob you, or a gang member will shoot through your living room window.

That's his reality. What's yours? Do you feel safer in Los Angeles now?