Skip to main content
20
Dec 2011
Striking before they kill 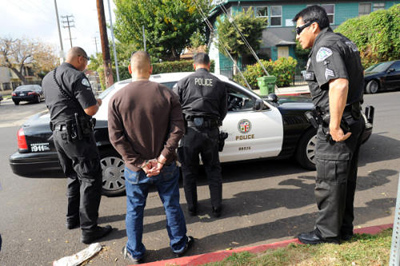 Sitting in an unmarked car on a recent morning, LAPD Sgt. Ron Alberca trained his binoculars on a man who had just left Van Nuys Superior Court and was walking briskly into the nearby residential area.

The man was Ruben M. Vasquez, who at 28, had two convictions for drunken driving.

The Canoga Park man had just come from a hearing where a judge checked to see if he was meeting the terms of his probation, which includes not driving because his driver's license had been suspended.

After following Vasquez for three blocks, Alberca watched as he got into the passenger side of an air-conditioning repair van.

Before he'd driven half a block, Alberca and two other officers on the Habitual Deuce (police slang for DUI) Offenders Unit, or H2O for short, pulled Vasquez over.

"These people just don't get it," said Officer Van Thompson. "It's only a matter of time before they hurt someone. They're not going to change."

Within 15 minutes, Vasquez was off to be booked on violating probation and his van was impounded for 30 days.

It was an expensive mistake for Vasquez. He's in jail, possibly until February, for violating the terms of his probation.

This is the kind of deterrent that the H2O unit, which patrols the San Fernando Valley, hopes will keep repeat drunk drivers off the road.

The five-officer unit monitors those with at least two DUI convictions, staking out their homes and following them from court to make sure they aren't driving. Some have come to court drunk; others have left, gone straight to a liquor store to pick up some booze, and then driven off after downing the alcohol.

Repeat DUI offenders are believed to be the cause of 8percent of all fatal alcohol-related crashes in California, according to the National Highway Traffic Safety Administration.

In California last year, 791 people died in alcohol-related crashes; the number has been steadily declining over the years, a trend experts attribute to more enforcement and public awareness. 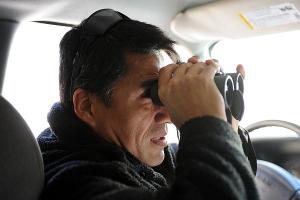 Sgt. Ron Alberca, head of LAPD's H2O unit, monitors a target outside the San Fernando Courthouse. Repeat DUI offenders are believed to be the cause of 8 percent of all fatal alcohol-related crashes in California. (Andy Holzman / Staff Photographer)

"We'll never know how many lives will be saved," said Alberca, who leads the unit. "You have to wonder how many of these guys would have gone on to hurt someone and kill someone."

But with the state's prison realignment and early release plan, the unit is expecting its number of arrests to increase as well as the number of violent crimes in the rap sheets of their suspects. Already, nine more names have come up on their radar, and these reoffenders were convicted for felony DUIs - where they injured or killed someone while driving drunk.

About 50 percent to 75 percent of convicted drunken drivers continue to drive on a suspended license, according to Mothers against Drunk Driving.

"It's a total disregard for the law and safety for others," said Katherine Robi, a member of MADD Los Angeles/Ventura Counties. "They don't care. They will offend again."

Robi, 49, and her daughter, 17, were severely injured after being broadsided in 2007 by a woman who was driving drunk and had been convicted of a DUI three times before.

"They are probably among the most dangerous among the defendants that we handle here," said Rick Schmidt, the deputy city attorney in charge at Van Nuys courthouse.

"When you find someone who has multiple prior convictions, it's an indication that they're driving drunk regularly," Schmidt said. "And it poses a significant risk to the public."

Before the unit's formation in 2004, judges frustrated with reoffenders would send their bailiffs to make sure they weren't driving away from court, Schmidt said.

Dmitry Gorin, a Van Nuys-based defense attorney, acknowledged that DUI offenders should not be driving and applauded LAPD's aggressive enforcement efforts, but said he had mixed feelings about the unit.

"I'm troubled that basically, a certain class of citizen is targeted," Gorin said. "It seems like the police, by targeting these folks, are minimizing their civil rights. It's like having a private officer looking out to see where you're going to step."

DUI offenders who aren't allowed to drive have difficulty supporting themselves or even their families, especially in L.A. where residents rely so heavily on cars, Gorin said.

It was a sentiment that Vasquez echoed as he sat handcuffed inside the police cruiser.

"I shouldn't be driving because I don't have a license, but people gotta make a living," said Vasquez, who said he was on his way to work and that he had a 7-year-old daughter to support. "There's worse people that are doing worse crimes."

But the H2O unit remains focused and motivated by knowledge of the potentially tragic consequences that repeat DUI offenders can cause when they get behind the wheel.

"This is going to follow you for a long time," Alberca said. "We'll go sit on your house, we'll go to court, and if you are driving, we will arrest you."