Skip to main content
10
Jul 2012
Summer heat can be deadly for children, pets left in cars

Inside an LAPD patrol car with the windows shut, a large block of ice quickly melted into a puddle as the thermometer topped a suffocating - and potentially deadly - 120 degrees.

With a heat wave broiling the San Fernando Valley, the LAPD's Valley Traffic Division staged a demonstration to warn parents and pet owners of the dangers of leaving a loved one inside a parked car.

"You think you're going to run a quick errand so you leave your child or beloved canine in the car. Two or three minutes turns into 15 or 20, and when you come back, disaster has occurred," said Capt. Ivan Minsal, the division's commanding officer.

Nationwide, 125 youngsters have died of vehicular heat stroke since 2009, including 10 this summer, according to KidsandCars.org, a child advocacy group. More than half were inadvertently left in the car and a third got into the vehicle by themselves.

That's why the Los Angeles Police Department is joining other agencies in asking parents and caregivers to look in the back seat every time they get out of the car. In addition, lock the car and put the keys out of reach of children when the vehicle is not in use.

"It's become second nature that we check that we haven't forgotten our phone. As parents and grandparents, we should also learn to check the car seat," said Officer Chad Dellinger, who conducts child-safety demonstrations around the San Fernando Valley. 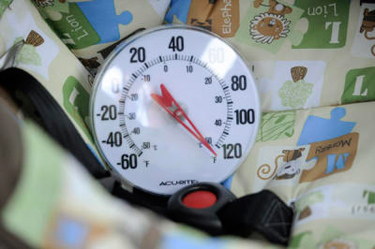 A thermometer in an infant car seat reads more than 120 degrees in the back of a police car Tuesday, July 10, 2012. The LAPD held a demonstration about dangers children and pets face on hot days. (Michael Owen Baker/Staff Photographer)

Dellinger noted that cars can become dangerously hot even if the outdoor temperature is only in the 80s.

It takes just 10 minutes for the temperature inside a car to rise by 19 degrees, with the mercury soaring 34 degrees after a half-hour, said researchers at San Francisco State University.

A child's body temperature rises three to five times faster than adults, so they succumb more easily to hyperthermia in an overheated car, officials said. Senior citizens also may be at heightened risk of heat stroke, which occurs when the body's core temperature reaches 104 degrees.

And having tinted windows or leaving the windows slightly open isn't enough to reduce the hazards of leaving a passenger or pet inside, Dellinger said.

Depending on the circumstances, a motorist may be cited for child endangerment or animal cruelty if a youngster or pet is left unattended, he said. More serious violations may result in a criminal prosecution.

The officers' warnings were timely, with near-record highs forecast for today and Thursday in the San Fernando Valley. Temperatures may hit 105 in Woodland Hills, 107 in Santa Clarita and 110 in the Antelope Valley before easing off about 10 degrees for Friday and the weekend, said National Weather Service specialist Dave Gomberg.

Anticipating that residents will be looking for relief, Los Angeles County announced that it will open its 55 community cooling centers, including libraries and senior centers in the Santa Clarita and Antelope Valleys. A complete list is available by calling the county information line at 211.

Minsal said motorists should make a habit of looking into theirs vehicle before walking away. And if you see someone locked in a car, dial 911.

"If the situation warrants, break the window or yell for help," he said. "Doing something is the most important."