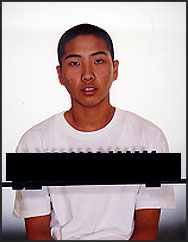 One of the Los Angeles Police Department's "most wanted" suspects was arrested as he was getting off a flight from South Korea to Los Angeles International Airport, U.S. Customs and Border Protection officials said today.

The LAPD had issued a warrant 12 years ago for Richard James Kim, 33, who was accused of attempted murder during a gang-related shooting in West Los Angeles, said CBP spokesman Jaime Ruiz.

He was held on $5 million bail, according to the county Sheriff's Department's website.

CBP officers confirmed the warrant through a database check into Kim's background as he flew aboard a Korean Air jetliner into LAX on Thursday morning, Ruiz said.

Kim and two juvenile accomplices allegedly shot two men with a .38 caliber handgun during an argument over gang affiliation, according to the LAPD and CBP.

"CBP officers are to be commended for their superior vigilance and steadfastness in protecting our nation's borders," said Todd Owen, CBP's director of field operations in Los Angeles. "This is only one of the hundred of fugitives, criminals and pedophiles intercepted and apprehended at LAX every year."