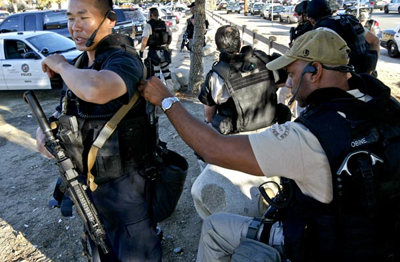 A parolee apprehended Wednesday night on suspicion of shooting a parole officer after an hours-long manhunt was involved in a standoff with SWAT officers in the same general area in 2002, law enforcement authorities told The Times.

Steven Hoff, 45, is suspected of seriously wounding the parole officer in an afternoon shooting in Lake View Terrace that sparked a massive dragnet and forced officials to close part of the busy 210 Freeway and lock down two schools, authorities said.

On Aug. 21, 2002, Hoff barricaded himself in a home in Sylmar as he was being sought by police and state parole agents in connection with a parole violation and the slaying of a motorcycle club member in Kern County, according to authorities and a news release prepared at the time by the Los Angeles Police Department.

Hoff surrendered after an hours-long standoff that ended when LAPD SWAT officers fired tear gas into the home in the 12900 block of McNeil Street, where Hoff was holed up in the attic, according to the law enforcement authorities, who asked not to be named because the shooting investigation was ongoing.

Hoff was taken back to Kern County, where he represented himself in Superior Court after being charged in the slaying of the Diablo Motorcycle club member in California City, authorities said. Hoff was charged with killing the man with a handgun during a dispute. He was acquitted in that case after arguing that he acted in self-defense, according to a law enforcement source. While he was in Kern County Jail in late 2002, Hoff filed a claim for damages against the county regarding the allocation of funding for the jail law library, according to county records.

Hoff is a "two-striker" with a lengthy criminal history, LAPD Lt. Andy Neiman told reporters. Hoff was convicted of being a felon in possession of a weapon and making terrorist threats, according to court records and law enforcement authorities.

Hoff was shot three times in an initial exchange of gunfire in Wednesday's incident, and he also was bit in the leg by a police dog, according to law enforcement sources. He was taken to a local hospital, where he was listed in serious condition with injuries that were not life-threatening.

Parole agents, assisted by Los Angeles County Sheriff's Department deputies, were searching for a parolee who had violated the conditions of his parole when they were fired on about 1:30 p.m. near the entrance of a Lake View Terrace home, authorities said.

The parole agent was hit once in the face. He was scheduled to undergo surgery to remove a bullet lodged in his jaw area, authorities said.

The 210 Freeway was shut down for hours between the 118 Freeway and Sunland Boulevard before it was reopened Wednesday night. Earlier, the closure caused a 6-mile backup, officials said.

Authorities were in the process of reuniting students Wednesday evening with their parents.