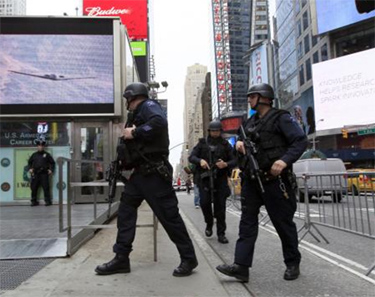 WASHINGTON - An unrelenting stream of suspicious package reports - and the need to investigate all potential threats in the post-9/11 world - is stretching federal and local law enforcement agencies in New York and Washington.

One of the many legacies of the 9/11 terrorist attacks, police agencies depend more than ever on the public to vigilantly report suspicious activity, knowing their cooperation means authorities will be buried in reports, most of which turn out to be nothing.

What's more, the reports routinely force street closures and building evacuations in Washington and New York at a cost of unknown millions of dollars, according to police estimates.

Since the terrorist attacks in 2001, New York City police have fielded 83,749 such calls - the overwhelming majority resulting in the recovery of benign handbags, kids' backpacks, suitcases and trash bags discarded by the homeless, according to NYPD records.

In Washington, the numbers, though smaller, have been rising for the past four years, in part because of an aggressive national surveillance strategy called "If You See Something, Say Something" launched last year by the Department of Homeland Security, said Thomas Wilkins, executive director of the D.C. Metropolitan Police Department's Intelligence Fusion Division.

Federal and local officials said the calls are part of a new normal in law enforcement. Yet some acknowledge that maintaining the pace of response has been a daunting task in the 10 years since the United States suffered its last major terrorist attack.

"I don't know how long we can keep this up," said former New Jersey governor Tom Kean, chairman of the 9/11 Commission, which examined the events leading to the assaults in 2001. "You hope that somehow things will go back to normal, but it's not there yet."

Calls from the public, though numerous, are among the most necessary parts of New York's anti-terrorism strategy, NYPD spokesman Paul Browne said.

Civilian reports of suspicious people, activity, packages and vehicles have assisted in foiling active plots against the city, including an attempt in May 2010 to detonate a car bomb in Times Square.

In that case, a street vendor alerted authorities to a smoking sport-utility vehicle laden with explosives.

Faisal Shahzad, a U.S. citizen born in Pakistan, pleaded guilty to the attempted bombing and was sentenced to life in prison. The incident is one of 13 plots that have targeted the city since 9/11, Browne said.

"It does cause the deployment of considerable personnel," Browne said of the citizen calls. "And it does cause some disruption for what, in the end, is almost always an innocuous thing. But we want the population vigilant. That is the post-9/11 reality."

In Washington, the police response to such calls can require five or six officers to resolve, Wilkins said.

Last year, the city fielded 1,023 calls, up from 730 in 2009. About 85% of those calls required the deployment of bomb squads or other hazardous materials units, Wilkins said.

"It does take up valuable resources," Wilkins said, adding that the public's engagement may represent "the best" defense against future attacks.

Last year, D.C. Police Chief Cathy Lanier elevated the response to suspicious package and material calls to "the top of the queue," Wilkins said. "For as long as there is a potential threat, we'll have to maintain this level of vigilance."

DHS spokesman Matt Chandler said the attempted Times Square bombing may be among the best-known examples of "citizens stepping up" to assist law enforcement officials to foil possible terror attacks. He said there is strong evidence that citizen activism has expanded well beyond New York and Washington.

Last month, an AWOL soldier was arrested near Fort Hood in Killeen, Texas, for allegedly plotting an attack against fellow soldiers after a gun store clerk alerted police about the soldier's suspicious behavior and purchase of gunpowder.

"We continue to see instances where terrorist attacks are thwarted by individuals who report suspicious activity to authorities," Chandler said.