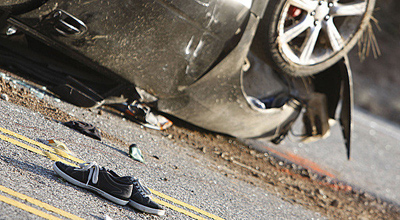 A 17-year-old football player was killed and three other teens seriously injured in this crash after a night of partying. (Brian van der Brug / Los Angeles Times / May 8, 2012)

WASHINGTON -- The chance of teenage drivers dying in a crash increases with every additional teenage passenger in the car, according to a new study by the AAA Foundation for Traffic Safety.

But a survey by Consumer Reports also found that drivers ages 16 to 21 are less likely to talk on a hand-held phone or text while driving if they bring friends along for the ride.

While the studies would seem to offer conflicting advice about young drivers, they come at a critical time.

House-Senate negotiators are scheduled Tuesday to begin writing a final transportation bill that could include financial incentives to states that crack down on distracted driving and establish graduated licensing programs that restrict teenagers' driving privileges.

The reports come a day after federal officials said they expect traffic deaths last year to decline to their lowest level since record keeping began in 1949.

"Although the overall number of teen driver fatalities has decreased substantially over the past several years, carrying young passengers is still a significant risk factor for young drivers,' the AAA Foundation for Traffic Safety said.

Still, the report notes, drivers under age 20 have higher rates of involvement in fatal crashes than drivers of any other age group except drivers age 80 and older.

Conversely, carrying at least one passenger age 35 or older cuts a teen driver's risk of death by 62%, according to the study. The study examined teen crashes that occurred from 2007 through 2010.

"These findings should send a clear message to families that parents can make their teens safer immediately by refusing to allow them to get in the car with other young people, whether they're behind the wheel or in the passenger seat,' AAA Foundation for Traffic Safety President and CEO Peter Kissinger said in a press release.

On the other hand, the Consumer Reports survey found that almost half the drivers ages 16 to 21 who have driven with friends said they were less likely to talk on a hand-held cellphone or text when friends were passengers. Almost 50% said they had asked a driver to stop using a phone in the car because they feared for their safety, according to the survey results, which appear in the magazine's June edition.

"Our survey showed that while far too many young people are driving while distracted, they are less likely to do so when their parents, friends, or siblings set a good example," Rik Paul, Consumer Reports auto editor, said in a release.

An earlier AAA Foundation for Traffic Safety study found that electronic device use was most common when drivers carried no passengers and least common when a parent or other adult was in the vehicle.