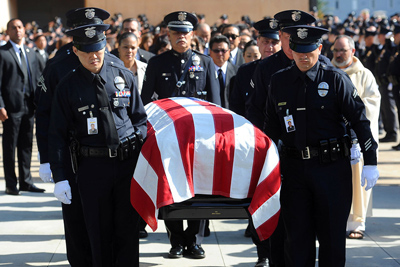 Pallbearers carry the casket of LAPD Officer Nicholas Lee following his funeral Mass at the Cathedral of Our Lady of the Angels in Los Angeles, CA March 13, 2014. Nicholas Lee was killed last Friday when the driver of a truck apparently lost control of his vehicle and struck Lee's police car, officials said. (Andy Holzman/Los Angeles Daily News)

A Los Angeles police officer killed in a traffic crash was remembered Thursday as a mentor and loving father at a downtown service that drew thousands of mourners, including Gov. Jerry Brown and Attorney General Kamala Harris.

Nicholas Lee, 40, was the "quintessential police officer," said Los Angeles Police Chief Charlie Beck, speaking to the more than 3,000 people that packed into the Cathedral of Our Lady of the Angels in downtown Los Angeles.

Lee, a 16-year veteran of the LAPD, was killed Friday in a collision between a police cruiser car and a truck in Beverly Hills. Lee's partner, identified only as Stephanie by LAPD officials, was injured in the crash.

The investigation is ongoing, but some believe the truck, which crushed Lee's cruiser, may have lost its brakes.

During the 90-minute service at the cathedral, Beck addressed the rows of officers in blue, recalling Lee's work at the Hollywood Division, where he trained young officers.

Beck also spoke directly to Stephanie, a trainee who attended Thursday's memorial after being hospitalized because of the collision. In a rare, personal moment, Beck recalled he, too, lost a partner in a traffic crash years ago.

"Mine died in my arms," Beck said, his voice shaking with emotion. "He will never leave you. He will always be in your heart. Your challenge is to live up to his expectations, your challenge is to be the cop he wanted you to be."

Lee leaves behind a wife, Catherine, and two young daughters, Kendall and Jalen.

The officer was born in South Korea, and came to the U.S. at age 6 with his parents, according to a brochure provided at the memorial. Raised in Koreatown, he graduated from University High School in West Los Angeles in 1991.

He met his wife at Cal State Fullerton, officials said.

Speaking to mourners at the cathedral, Archbishop Jose Gomez suggested Lee's legacy would endure, through the lives of his wife and daughters, and the love he brought to the world.

The 3,000-seat cathedral was at capacity as the ceremony drew hundreds of law enforcement officers from across Southern California Officers arrived in uniform from Ventura County, Long Beach and Beverly Hills.

Mayor Eric Garcetti, who represented the Hollywood area as a city councilman, cited the lives Lee saved and protected during his time on the force.

"We look up to Nicholas, and see an angel, soaring over this city of Angels," Garcetti said.

Craig Cox, a manager at a homeless shelter for at-risk youths in Hollywood, said Lee was different from most cops because he took the time to interact with the kids. He was frequently called to the shelter when the youngsters acted out, Cox said.

"He treated them with the utmost respect and courtesy, knowing their circumstances," said Cox, who wasn't able to attend Thursday's service. "He seemed like a very compassionate person."

After the ceremony, family members and officers traveled to a graveside service at Forest Lawn Memorial-Park in Glendale. Hundreds of law enforcement cars sped under a tent of raised America flags, held aloft by a group of Patriot Guard Riders, a national organization of motorcycle riders.

Speaking on the floor of the House of Representatives Thursday morning, Rep. Adam Schiff, D-Burbank, said Lee "selflessly served his community" and asked his colleagues to join him in sending condolences to the Lee family.

In Sacramento, the state Senate adjourned in memory of Lee, according to a tweet by state Sen. Kevin DeLeon, D-Los Angeles. "Our thoughts & prayers go out to his family," DeLeon wrote.