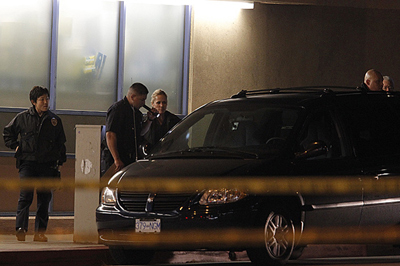 Los Angeles police examine a vehicle taken into custody when a "person of interest" was detained in connection with a string of arson fires. (Rick Loomis / Los Angeles Times)

That night, officials had distributed a video of a man walking near a car fire at the Hollywood & Highland Center parking structure. Beck said unnamed federal officials recognized the man and gave police information about him.

Booking records identified the man as Harry Burkhart, 24, a Hollywood area resident. He is being held in lieu of $250,000 bail at the Inmate Reception Center in downtown L.A.

''He is the most dangerous arsonist in Los Angeles County that I can recall,'' Sheriff Lee Baca said at an evening news conference.

No new arsons have been reported since Burkhart was taken into custody, but police stressed that the investigation was ongoing.

The fires have caused an estimated $2 million in damage, authorities said.

At a news conference Monday, officials said the arson task force is sifting through about 100 clues in the case.

Beck said : "I feel very good that we've got the right guy. [The suspect] had the right stuff in his van, and we are confident in the arrest.''

At the news conference Monday evening, Beck stressed the investigation was still ongoing and that it could take some time to present the case to prosecutors. "We are confident in our investigation, but we have a long way to go," he said.

Beck, Mayor Antonio Villaraigosa and others praised the joint task force probing the more than 50 fires over four days.

Burkhart appears to have been battling the U.S. government over the immigration status of his mother.

The Los Angeles Police Department is in communication with federal immigration officials concerning the dispute, the law enforcement sources said.

LAPD detectives found materials inside Burkhart's minivan that could have been used to set fires, the sources said. All of the sources spoke on the condition of anonymity because the case is ongoing.

The man was detained near a drugstore at the corner of Fairfax Avenue and Sunset Boulevard early Monday morning, according to a witness to the incident.

Several sources said Burkhart is believed to be the same person seen in a surveillance video released by police Sunday, when authorities pointed to the individual as a "person of interest" in the case.

The suspect was taken into custody following a morning of fires across the Hollywood area Monday. Eleven fires were reported in two hours, beginning at 1:30 a.m.; most were burning cars and carports in apartment complexes, police and fire officials said.

A total of 53 "fires of concern" have broken out in the Los Angeles area since Friday, possibly the work of one arsonist.

Of those fires, 45 occurred in the Los Angeles area, another nine were in West Hollywood, and one was in Burbank, Erik Scott, a spokesman for the Los Angeles Fire Department, wrote in a post on LAFD Alert, the department's blog.