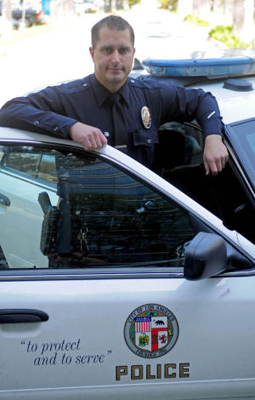 Owen Berger saw the movement out of his right eye. Suddenly, the shots rang out.

"I heard two pops and saw the muzzle of a gun blast," said Berger, a Los Angeles police officer who lives in Torrance.

One bullet hit Berger's right wrist, pierced it and hit him in the center of his chest on his bullet-resistant vest.

Wounded, Berger transferred the gun to his left hand, kept firing and escaped.

SWAT officers eventually surrounded the house, waited the gunman out, and arrested him.

Berger, who spent a year rehabilitating his wrist before rejoining the force, is one of 10 police officers set to be honored Thursday with a Los Angeles Police Department Medal of Valor, the agency's highest award for bravery.

The officers, including two who encountered the same gunman in Los Angeles on Nov. 7, 2008, will be feted during a luncheon at the Grand Ballroom at Hollywood & Highland.

"I'm just really happy. It's just nice," Berger said. "I'm happier for my wife. She is the one who had to deal with everything with me. It's nice for her to see some recognition."

Berger, 29, was working patrol that day with his partner, Thorsten Timmermans, when the call went out at 2 a.m. near 109th Street and Croesus Avenue in Watts - a man with a gun was holding hostages in a house.

When they arrived, the house was dark. Meeting up with Sgt. Roy Gardner, they made their way along the side of the house to the rear yard.

Three women walked out of the door.

"We asked them what's going on," Berger said. "They were all really nervous and the first thing one of them said was, 'He's gone. He's gone.' You could tell he wasn't gone."

One of the women ran into the house. Fearing for her safety, Berger went in after her. Timmermans followed, keeping another woman from entering.

"I looked across a hallway and I saw a man who was holding the shoulder of the woman who had run in," Berger said. "I couldn't see his right hand. I had my gun out. I told him to get his hands up."

Shots rang out. But not from the man Berger was pointing his gun at. A second man down the hall - the actual hostage-taker - had opened fire.

"One hit me in the wrist," Berger said. "The next thing I remember is just backing up and shooting with my left hand."

Berger backed seven to 10 feet down the hallway, shooting at the doorway as he entered a bathroom. He fell backward into the bathtub as he kept firing.

Timmermans and Gardner spotted the man behind the doorjamb and shot at him. The gunman, identified later as Samuel Jerome Jackson, backed away but kept firing through the wall in the direction of Timmermans.

The three officers retreated from the house and called in a special weapons team. After several hours, Jackson surrendered.

"These officers are commended for courage under fire, teamwork and dedication," Los Angeles Police Chief Charlie Beck wrote in a letter to the Board of Police Commissioners urging the Medal of Valor honor. "They displayed heroism, unwavering bravery, made sound decisions that saved lives, and prevented further injuries to all involved."

Timmermans and Gardner also will receive Medals of Valor at the luncheon.

Jackson was found guilty in 2010 of attempted murder, assault on a police officer and possession of a firearm by a felon. He was sentenced to 40 years to life in prison.

"He had violent interactions with the police before," Berger said. "That night he came home, he was really upset. He came home waving a gun around. He was kind of crazy and his family didn't want to deal with it and so they called the police."

Berger said he spent five months in a cast and a year rehabilitating his wrist.

Berger's wife, a teacher, and other family members will attend the program honoring him. Berger and his wife are the parents of a 13-month-old son.

"It re-emphasizes the importance of family," Berger said.