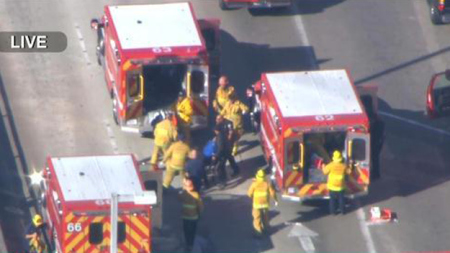 A TSA agent was killed and several other people were injured Friday in a shooting at Terminal 3 at LAX, police said.

Preliminary indications show that he was targeting TSA employees, according to Miller.

The suspect pulled an assault rifle out of his bag, began to open fire in the terminal and proceeded to the TSA screening area, where he was able to gain access to the airport itself, according to Chief Patrick Gannon of Los Angeles World Airports.

Personnel officers tracked the man, who was able to travel as far as a Burger King restaurant. Officers then engaged in gunfire with him and were subsequently able to take him into custody, he said.

"We believe there was a lone shooter...only one person that was armed in this incident," Gannon said.

At least seven people were treated and six were taken to local hospitals. Three of them were transported to UCLA Medical Center, where one of them were listed in critical condition and two others were said to be in fair condition.

"We are sickened by reports of today's shooting at the Los Angeles International Airport," TSA Union Leader J. David Cox Sr. said. "Our sincerest thoughts and prayers go out to the passengers and Transportation Security Officers killed or injured in this heinous act. Thank you to all of our brave TSOs who put their lives on the line every day to keep the flying public safe. AFGE is monitoring the situation along with TSA management."

Terminal 3 was evacuated and cordoned off and arrival and departure roads to the airport, in addition to Century Boulevard, were closed. All airport exits from the 105 and 405 freeways were also shut down.

A large box of ammunition has been recovered on LAX property, Miller said. An LAPD bomb squad and tactical team were sweeping the terminal and evaluating baggage.

Passenger Robert Perez told CBS2 that TSA agents came through the terminal and yelled that a man had a gun.

"I heard popping and everybody dropped to the ground," Perez said.

Another witness said he actually saw the alleged shooter.

"I was waiting for my flight and heard a rumble of people, which I thought was an earthquake, but then I saw people running and heard gun shots, immediately dove under the benches at my gate, and then gunshots stopped and I got up and called my wife," Billy Bey said. "Then I saw a man walking towards the gate, when I saw him I thought he was just a passenger looking for his gate, but when he kept walking, I saw he had something looked like an assault rifle, a huge gun strapped over his shoulder, hanging down on the right side of his waist."

Passenger Rodrigo Jara told KNX1070 NEWSRADIO he was waiting in line to go through the security line in Terminal 3 when he heard a loud sound.

"I heard 'pop, pop, pop,' and then we fell down, and little did I know, I looked to the side, and this guy's going up the stairs with the rifle," Jara said.

Jara described the shooter he saw as a white male with blonde/dirty blonde hair possibly wearing khakis, clean-cut, and "walking like he was going to buy tea."

The airport was expected to partially reopen at 1 p.m.

The Los Angeles Police Department has been placed on citywide tactical alert.

Other Southland airports, including Bob Hope International Airport in Burbank, are on heightened alert.

The FBI will be a lead agency in the investigation. It will be aided by the LAPD, LAWA, and the U.S. Attorney's Office.