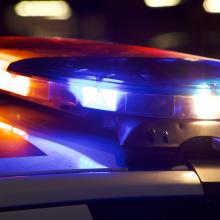 Two Los Angeles police officers were injured Monday night when their cruiser struck a fire hydrant and flipped over in South Los Angeles.

The crash occurred just before 8 p.m. in the 6000 block of South Vermont Avenue, near the intersection with 61st Street, according to the Los Angeles Fire Department. The impact sheared the hydrant.

One of the officers was trapped in the overturned vehicle and was removed by firefighters, according to the Fire Department.

Both officers were taken to a hospital and are in stable condition, said LAPD Public Information Officer Mike Lopez.