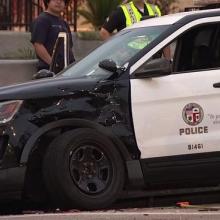 A police cruiser is involved in a multi-vehicle crash in Los Angeles on June 16, 2019.
City News Service
NBC Los Angeles

The two injured LAPD officers were transported to a hospital for treatment, Stewart said.

The other people involved in the crash were not injured, she said.