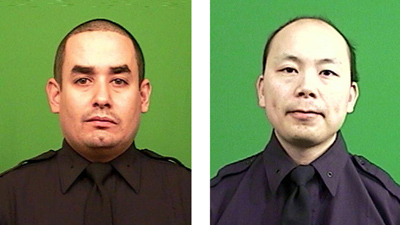 A man who posted anti-police rants online shot dead two New York City policemen as they sat in their patrol car Saturday, an attack that further shook a city where community-police relations have been tense following the deaths of unarmed black men at the hands of cops.

"They were quite simply assassinated - targeted for their uniform," Police Commissioner William J. Bratton said about five hours after the ambush in the Bedford-Stuyvesant area of Brooklyn.

Bratton said the shooter, who apparently committed suicide in a nearby subway station minutes after the attack, acted so swiftly that neither officer had time to pull a weapon. "They may never have actually seen their assailant, their murderer," Bratton said during a news conference at the hospital where both officers were pronounced dead.

Officers Rafael Ramos and Wenjian Liu were the first pair of New York policemen to be shot dead in the same incident since March 2007. Bratton identified the shooter as Ismaaiyl Brinsley.

Police in Baltimore said that Brinsley, 28, shot and wounded his ex-girlfriend earlier Saturday in Owings Mills, Md. Because Brinsley had Brooklyn connections, Baltimore officials sent a warning to New York about 2:45 p.m. that he may be headed to the city, Bratton said.

"Tragically, this was essentially at the same time our officers were getting ambushed and murdered," Bratton said.

At 2:47 p.m., Bratton said, Brinsley walked up to the patrol car, took a shooting stance on the passenger's side and pumped several bullets through the passenger window. Liu and Ramos were each hit in the head.

Ramos, 40, was married with a 13-year-old son. He had been with the NYPD for two years. Liu, 32, was a seven-year veteran of the force and recently married.

In the hours before the Brooklyn shootings, Bratton said, it appeared Brinsley had used his ex-girlfriend's Instagram account to post messages about police and warnings that he planned an attack.

"I'm Putting Wings on Pigs Today," one post read. "They take 1 of ours ... Let's Take 2 of Theirs." "I'm Putting Pigs in a Blanket," was also in the post, which included a photograph of a gun. It included the hashtags "#RIPEricGardner" and "#RIPMikeBrown."

The shootings drew immediate condemnations from leaders of marches that have occurred almost nightly in New York to protest what critics say is police abuse of power. They also sparked a flurry of statements from political leaders, including Atty. Gen. Eric H. Holder Jr. and Gov. Andrew Cuomo, a sign of the concerns officials have that police-community relations could spiral further downward.

"This was an unspeakable act of barbarism, and I was deeply saddened to hear of the loss of these two brave officers in the line of duty," Holder said. 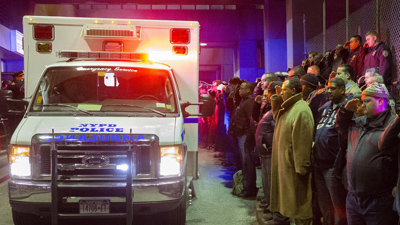 Mourners stand at attention as the bodies of Officers Rafael Ramos and Wenjian Liu are carried off in an ambulance.(John Minchillo / Associated Press)

"The officers who serve and protect our communities risk their own safety for ours every single day -- and they deserve our respect and gratitude every single day," President Obama said in a statement. "Tonight, I ask people to reject violence and words that harm, and turn to words that heal -- prayer, patient dialogue, and sympathy for the friends and family of the fallen."

Mayor Bill de Blasio, who has been accused by the police officers' union of siding with protesters, called the slayings "particularly despicable."

Police unions have accused De Blasio of showing police a lack of respect. The Patrolmen's Benevolent Assn. has gone as far as asking officers to sign a form, under the heading "Don't Insult My Sacrifice," requesting that the mayor stay away from their funeral if they are killed in the line of duty.

The ill will continued Saturday as the Sergeants Benevolent Assn. tweeted: "The blood of 2 executed police officers is on the hands of Mayor de Blasio. May God bless their families and may they rest in peace."

Anti-police marches began in New York in July after an unarmed black man, Eric Garner, was put in an apparent chokehold by a white officer and died. More protests erupted after the November death of Akai Gurley, an unarmed black man shot by police in what Bratton has called a tragic mistake.

This month, a grand jury declined to indict the officer involved in Garner's death, adding to activists' anger and fueling ever-larger demonstrations. The protests turned violent Dec. 13 when police say a group of marchers attacked two officers on the Brooklyn Bridge, leaving one with a broken nose.

Activists who have taken part in or led demonstrations denounced Brinsley's actions and expressed concern that the shootings could undo attempts at mending frayed police-community relations.

The hashtag "#BlueLivesMatter" was circulating on Twitter, a response to the spread of "#BlackLivesMatter."

"This could not have come at a worse time," said Robert Cornegy, a city councilman representing the neighborhood where the shooting occurred.

Cornegy, speaking to reporters on the street, said he thought the recent protests had given voice to people who believe police have acted without restraint in black and Latino neighborhoods. "There seemed to be some progress being made through the protests. We believe the voices of this community and the entire city were being heard," he said.

Al Sharpton said he had spoken to Eric Garner's family Saturday and they were "outraged" by the shootings. "Any use of the names of Eric Garner and Michael Brown, in connection with any violence or killing of police, is reprehensible and against the pursuit of justice in both cases," Sharpton said.

Brown was shot to death in Ferguson, Mo., in August by a white police officer. As in Garner's case, a grand jury declined to indict the policeman.

Brown's family released its own statement also condemning the killings: "We reject any kind of violence directed toward members of law enforcement. It cannot be tolerated."

Bratton said police were checking Brinsley's background to see whether he had other similar postings anywhere as they sought to determine whether hatred of police was his sole motivation.

He said they also were trying to learn whether Brinsley had taken part in any anti-police marches that have been held in U.S. cities since the summer, but neither Bratton nor De Blasio indicated that Brinsley was part of an organized group.

If anything, at least in these early stages, he was being portrayed as a lone wolf with no firm roots in any community. Bratton said his last residence appeared to be in Georgia.

The last New York City policeman to be shot dead while on duty was Peter J. Figoski in December 2011. This year, Officer Dennis Guerra died of injuries suffered on duty while responding to a fire.

After the shootings Saturday, streets surrounding the site and near the subway station where Brinsley shot himself in the head were closed to traffic for hours. Flashing red lights lit up the usually busy neighborhood as darkness fell, and residents stood watching the scene. The attack occurred in a neighborhood with a relatively high crime rate that has seen rapid gentrification as people priced out of Manhattan and other parts of Brooklyn move in.

"I'm just surprised this kind of thing could happen here," said Imelda Brown, who was going to catch a bus home to another neighborhood but had stopped to see what was going on. "You know there's some crime in some of these areas, but you don't expect someone to just walk up to a couple of cops in broad daylight and blow them away."