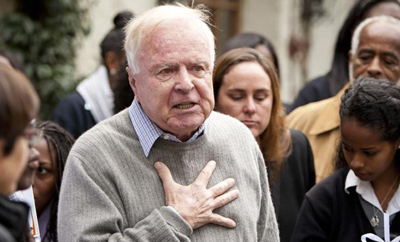 Former Mayor Richard Riordan, shown in 2011, on Monday ended his bid to get his L.A. pension plan on the ballot. (Bret Hartman / For The Times)

Representatives of Los Angeles city labor unions on Monday hailed the announcement that former Los Angeles Mayor Richard Riordan had pulled the plug on his ballot measure effort to roll back pension benefits for city employees, calling it an expensive and poorly thought out proposal.

Tyler Izen, president of the Police Protective League, said he was not surprised by the collapse of the signature drive backed by Riordan. Izen said the pension proposal, which had been planned for the May ballot, never received the proper financial analysis in the weeks before Riordan began his push to get 300,000 signatures to put it on the ballot.

"The plan proposed by Riordan to close the defined benefit pension system as a way of saving money was both simplistic and costly ... for the taxpayers," Izen said.

"City residents weren't about to let a bunch of billionaires rewrite city policies," Wright said. "As city workers have been saying for a long time, Riordan's half-baked plan wasn't thought out. It died because it was bad for city workers and the city they serve."

On Monday, Riordan spokesman John Schwada said there was no way organizers could gather enough signatures for the pension measure by the Dec. 28 deadline. The measure sought to roll back benefits for existing workers and put new employees into a 401(k)-style retirement plan.

Former prosecutor Kevin James, another mayoral candidate, had thrown his support behind the measure. And Riordan advisers had disputed claims from the unions, saying the pension ballot plan would save more money for taxpayers than any of the measures to cut retirement costs that have been approved by L.A. leaders so far.