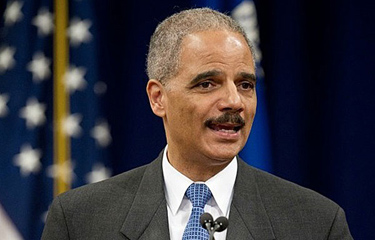 Atty. Gen. Eric H. Holder Jr., shown in a file photo, said in a statement accompanying new crime statistics, "I have made it a priority of this Department of Justice to protect the American public by aggressively fighting violent crime. (Paul J. Richards / AFP/Getty Images / September 19, 2011)

Violent crime in 2010 dropped 6% from the year before, the FBI reported Monday, the fourth consecutive year of such declines.

The government's annual report, called "Crime in the United States," is based on data from more than 18,000 city, county, university and college, state, tribal and federal law enforcement agencies from around the nation and presents the most complete picture of what residents do to other residents in the way of crime.

"Safe communities are the foundation of our nation's prosperity and I have made it a priority of this Department of Justice to protect the American public by aggressively fighting violent crime," Atty. Gen. Eric H. Holder Jr. said in a statement.

"We've targeted gang leadership in communities from Florida to New York, and from Tennessee to North Carolina. We've renewed our commitment to fighting organized crime, whether it is traditional La Cosa Nostra or Mexican drug cartels," Holder said.

The top crimes were drug abuse violations, at 1.6 million, followed by driving while intoxicated at 1.4 million, the FBI said.

About 10.3 million crimes were reported in 2010, according to the FBI.