Skip to main content
15
Feb 2017
With Valley murders on the rise, LA leader pushes for LAPD report on gangs 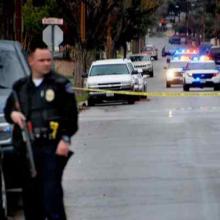 This Dec. 23, 2016 file photo shows a police officer at the scene of a gang-related shooting in San Fernando that left one person dead and at least three others injured. Photo by Mike Meadows/Special to the Los Angeles Daily News/SCNG/File
LA Daily News

With the San Fernando Valley experiencing a significant increase in homicides over the last two years, a City Council committee on Monday advanced a motion that would direct police to prepare a report on gang activity west of the 405 Freeway.

The motion approved by the Public Works and Gang Reduction Committee states that in "the western San Fernando Valley, street gangs have been a continuing problem, with various criminal acts being committed by gang members."

The motion, which was written by Councilman Bob Blumenfield, also says: 'In 2015, the Valley experienced a significant increase in murders, with a majority of them being gang-related."

According to the motion, most of the city's efforts to address gang violence have not been focused on the western San Fernando Valley, and it "would be beneficial" for the City Council to hear from the Los Angeles Police Department and the Mayor's Office for Gang Reduction and Youth Development on gang issues in that region.

"We do know, colleagues, that public safety is at the forefront of what we do here in local government," Councilman Joe Buscaino, a former LAPD officer and current reserve officer, told his fellow committee members.

"If people don't feel safe, if gang members are taking over communities, then people are not going to want to live, invest and raise their families in the city," Buscaino said. "And I do know the police department has had amazing success in curbing gang violence in the city of Los Angeles."