It's a tradition at the Los Angeles Police Department -when the child of a veteran officer joins the force, father and child pull a shift on patrol together. Usually it's a proud dad and his son.

On Wednesday, Officer Jamie Carganilla, 29, joined her father, Officer Pat Cronin, to cruise a quiet corner of the San Fernando Valley for a father-daughter reunion. 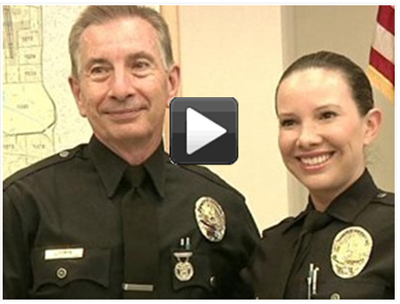 When the offspring of a veteran officer joins the Los Angeles Police Department, they go out on patrol together just once. Usually it's a proud dad and his son. But Jamie Carganilla is following in her father's footsteps. (Click here or on the image to watch the video).

"I need a car seat for my daughter," he said, as they checked out rifles together after roll call.

As they checked the police cruiser's lights, sirens and computers, Carganilla laughed at her father's jokes like a dutiful daughter.

She recently finished her year of probationary service in the Topanga Division and will be reassigned to a permanent position soon. She's not the first female officer to pull a shift with her father, but it's unusual because the police force is still mostly male.

Before her shift on the streets of Reseda, Carganilla has to admire photos of her dad at the beginning of his law enforcement career, pose for the captain's photos and endure some razzing from her dad's colleagues.

"This is so weird," he said as they pulled out of the station parking lot together.

Cronin, 60, has trained new officers at the West Valley station for 10 years.

"I try to instill in them that this job really is special, it really is interesting and that no two days are exactly the same," he said. "It's just different having my daughter here. Because I scold her all the time."

Carganilla wasn't one of those kids who dream of being a cop. She had stage dreams, and eventually performed in musicals and sang for Disney for four years.

When it came time to plot a new career course, her father suggested that she become a police officer.

"He just kind of threw the idea out there. At first I was like, 'What? No way! I could never.' But the more I thought about it, the better it sounded. And I just decided to go for it," she said.

Her mother, Cronin's wife, was not thrilled with the idea.

"I don't think she'll ever be as comfortable with it as Jamie and I are," Cronin said. "Because she's a mom."

"She's a worrier," his daughter added.

An only child, she was born while her father was a cadet at the police Academy.

"The last thought I had then was that someday she would grow up to be a police officer. But I tell you, life has a way of surprising you," her father said.

She's not fresh out of the Police Academy. She has already been under fire in a gang incident in her home division.

The two didn't get much time to enjoy their shift together Wednesday in the San Fernando Valley. They responded to a call about a man who appeared to be trying to set fire to his own car.

The man, who had been taken to a hospital for a psychiatric evaluation the day before, was frantic and his eyes bulged.

Father and daughter split up to work the scene like partners who've known each other for years. Cronin handcuffed the man and put him in the backseat of the cruiser, while Carganilla talked to the man's worried wife.