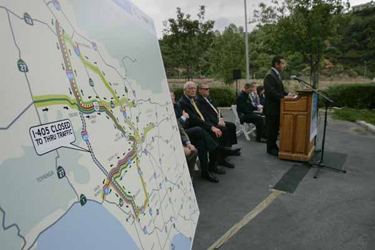 Los Angeles Mayor Antonio Villaraigosa pleads with residents to stay away from the 101-405-10 freeways on the weekend of July 16-17. The 405 will be completely shut down for roadwork through the weekend. There was a press conference held to advise the public about the closure Monday. (Photo by David Crane/Staff)

The countdown to car-maggedon has officially begun.

Using electronic freeway signs and Internet banner ads, Caltrans is warning motorists to make plans for coping with the closure of the San Diego (405) Freeway for 53 hours in mid-July.

From late July 15 through early July 18, one of the nation's busiest thoroughfares will be closed from the 101 to the 10 Freeway while crews dismantle the southern half of the Mulholland Drive overpass. The bridge is being replaced as part of a $1 billion upgrade to widen and add a carpool lane to the 405.

The closure is expected to create a traffic nightmare - county Supervisor Zev Yaroslavsky has dubbed it "car-maggedon" - as motorists determined to travel between the San Fernando Valley and the Westside seek detours over winding canyon roads. Transit officials, however, want motorists to say as far as possible from that stretch of the freeway.

"We have Internet sites picking up on our banner every day," said Dave Sotero, a spokesman for the Metropolitan Transportation Authority.

More than five dozen electronic billboards have begun carrying messages about the pending closure, and 30 more will be added in early July. Signs will also be posted on surface streets.

And so motorists from outside the region don't unwittingly find themselves caught in the mess, officials plan to post warnings on north-south roads from the California-Oregon border.

Meanwhile, lane closures along Sepulveda Boulevard are expected next week as part of the freeway widening project.

Beginning Monday, trench work will begin on Sepulveda Boulevard between Mountaingate Drive and the northern section of Skirball Center Drive. The project, which will ground utility lines from the Department of Water & Power, is expected to last about 11 months. Lane closures will be intermittent during those 11 months and will not be closed from July 15-18, Sotero said.