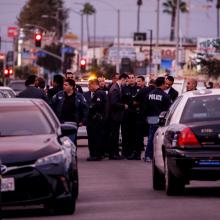 Jaleyah Collier had just said goodbye to Kevin Cleveland outside a doughnut shop a few blocks from Hawkins High School on a spring afternoon in 2017. Get home safe, she told him before walking away.

Minutes later someone drove into an alley nearby, got out of the car and asked Kevin, 17, and two others about their gang affiliation. The gunman then sprayed them with at least 10 rounds, killing Kevin and injuring the others.

Jaleyah, then a high school sophomore, barely had time to grieve when a month later, her best friend, Alex Lomeli, 18, was shot and killed when someone tried to rob a market about a mile from the same high school, located at 60th and Hoover streets.

In the early hours of Mother’s Day 2018, two other teens Jaleyah was close to, Monyae Jackson and La’marrion Upchurch, were walking home with friends, when they were fatally shot near Dymally High School.

Each of Jaleyah’s friends was killed within walking distance of public high schools in Los Angeles.

“You don’t know when it’s going to be a person’s last day,” said Jaleyah, a senior at the Community Health Advocates School, one of three small schools on the Hawkins campus. “[Kevin] woke up not knowing.”

For the rest of the article, please visit: https://www.latimes.com/projects/la-me-edu-school-safety-deaths-nearby/