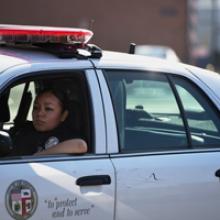 For the second year in a row, violent crime is up in Los Angeles. Through March, homicides rose 24 percent compared to the same period last year. Overall, violent crime - which includes homicides, robbery, aggravated assaults and rape - is up 13.4 percent, according to LAPD data.

The latest trend breaks from more than a decade of falling crime rates in the region.

Experts note that L.A. is still charting rates well below what they were in the 1980s. They urge a longer view of trends to understand the full context of what's happening in the city, where violent crime is affecting neighborhoods and communities differently.

But is the rise cause for concern?

A panel of experts joined Take Two's A Martinez to explore some of the explanations behind why this is happening now and what's being done about it.

Charis Kubrin is professor of criminology, law and society at University of California, Irvine. She also co-directs the Irvine Laboratory for the Study of Space and Crime.

Angela Hawken directs the Swift, Certain, and Fair Resource Center for the U.S. Department of Justice and is a professor of economics and policy analysis at the School of Public Policy at Pepperdine University.

Jody David Armour is professor of law at the University of Southern California and a Soros Justice Senior Fellow at the Open Society Institute's Center on Crime, Communities and Culture.

Charis Kubrin on analyzing the data:

"If you compare to the last couple of years, things aren't looking so good and we should be concerned. If you do take the longer term time frame, and consider what crime rates have done in comparison to 20-30 years ago, things aren't as bad as one might predict...a lot of these questions don't just depend on the time frame but also the unit of analysis you're focusing on...I think it's important to acknowledge the trends at each of these levels. I think for the city as a whole...the last two years have not been great for the city. But for the last 20 years, L.A. has seen an unprecedented decline...so LA overall is in a very good position."

Jody David Armour on how this compares to the longer view of the city:

"As a result of the consent decree, we moved toward less aggressive policing strategy and at the same time crime continued to dip, continued to go down through 2000 into early 2011, 2012, 13, right? And so it shows that we could change the relationship between the police and the community, not have necessarily very aggressive policing and still have reductions in crime. So my concern is, how this data will be interpreted politically as a call for more law and order, harsher policing, longer sentences or to stay the course that we've been so successful at for all this time..."

"Our present release strategies really do set up people for failure...In many states, prison release strategy is $40 dollars and a bus ticket. For individuals who have spent sometimes years in custody, haven't made a decision in years, someone's telling them when to shower when they will eat and how long they may eat for. Suddenly, they're on the streets, how long is that $40 dollars going to last? And what do we really expect on Thursday, when they've been released on Tuesday and they've run out of money by Wednesday morning...it's such a shortsighted strategy. To release someone like this who has absolutely no resources directly into the community, to think that they're going to succeed and a week later if they have mental health issues, for example, they're right back into custody...just a slight change in resource allocation can make all the difference."