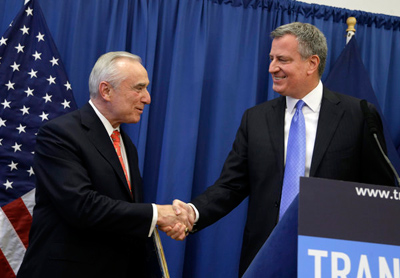 Los Angeles police Chief Charlie Beck said he called his "good friend" and "mentor" William J. Bratton to congratulate him on his appointment for the second time as New York City police commissioner.

New York Mayor-elect Bill de Blasio made the announcement at a news conference in Brooklyn on Thursday morning.

"The fact is that over an extraordinary career, Bill Bratton has proven you can fight crime effectively and bring a community together," De Blasio said. "Wherever he's gone he's driven down crime."

De Blasio chose Bratton from, among three candidates and said he and the new commissioner have a shared, progressive vision for New York.

Beck, who worked under Bratton and succeeded him as L.A. police chief in 2009, told KTLA News during his weekly live appearance, "They couldn't have picked a better person. This is exactly what New York needs."

He also tweeted: "Great things to come in NewYork. They are extremely lucky to have @WilliamBratton."

Bratton's time as New York's top cop made him an international figure, so by the time he came to Los Angeles in 2002, he was already a law enforcement superstar who had appeared on the cover of Time magazine in the '90s for his success in New York. He served as LAPD chief until 2009.

It was his leadership in Los Angeles that cemented his reputation as one of the country's leading law enforcement minds.

"Without public safety, all the other promises of our democracy suffer. They are on a shaky platform. Freedom of speech, freedom of press ... everything that our country stands for," Bratton said in New York after his appointment was announced. "I will get this right in this city once again. That's my promise. That's my commitment."

Bratton implemented a crime-fighting strategy in Los Angeles built around crime data and a computer-mapping system used to identify specific areas of the city that require more policing.

It was a "game changer" for policing in New York when it was implemented there, De Blasio said.

That approach, along with a management style that placed considerable authority in the hands of his field commanders, produced results in L.A. Crime rates fell steadily each year under Bratton.

"What he did in Los Angeles was not only extraordinary in terms of reduction of crime, but dare I say Bill Bratton walked into a tense, difficult situation years in the making," and built partnerships with the community and made it work, De Blasio said.

"In a place where you would have thought it would take decades to heal wounds," De Blasio added.

He also tried to decrease mistrust between the department and the city's black and Latino communities that stretched back to the Watts riots and through to the Rodney G. King beating, the 1992 riots, the Rampart scandal and the May Day 2007 melee in MacArthur Park.

A similar dynamic has developed in New York over its stop-and-frisk policy. De Blasio ran on a platform of changing the controversial practice which disproportionately effects young minority males.

Bratton said he has an opportunity to use the department to address race and class.

"If we can get it right here, this is in many respects a beacon that can light the rest of the world," he said.