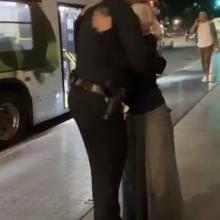 A homeless woman, who serenaded the public at a Metro stop, recently got her wish to meet the LAPD officer who shot the viral video.

Zamourka told the Los Angeles Times that she came to the United States at age 24 from Russia, where she learned violin and piano. She told the LA Times that after years of financial hardships, she's homeless.

She was caught singing at the Metro Purple Line Wilshire/Normandie stop.

Since the video went viral, she's been invited to sing at the opening of Little Italy in San Pedro this weekend and has reportedly been offered a recording contract.

The LAPD Twitter had this to say in a caption Wednesday night: "We saw with our brains, but we listened with our hearts. Her voice continues to captivate our city, and as the offers for help pour in, we asked: “Emily, what can we do for you?” Her answer: “I want to thank Officer Frazier for taking the video.” Her wish was granted tonight."