Skip to main content
26
Jun 2013
Cause for great concern: L.A. is safer but our officers are not 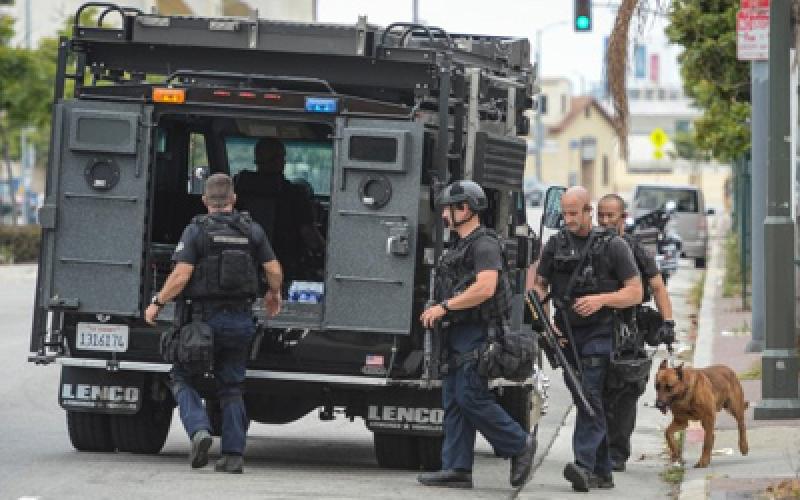 LAPD SWAT teams search along Washington Boulevard in the Mid City area on June 25, 2013, for a suspect who shot at two detectives near the Wilshire LAPD station early that morning. Police closed 25 square blocks for hours during the search. (David Crane/Los Angeles Daily News)

L.A. crime rates may be going down but as the events of Tuesday revealed all too painfully, violent crimes against police officers are going up.

Four officers were shot at in two separate attacks on Los Angeles law enforcement, leading to a massive manhunt in one case and a SWAT response to a barricaded suspect in the other. Of the four, three were struck, including an officer who was shot in the face.

The terrible day began around 4:45 a.m. when two LAPD Wilshire detectives were ambushed as they entered the parking lot of the Wilshire Area. The officers escaped serious injury and returned fire. They were taken to the hospital, treated and soon joined their fellow officers in hunting for the attacker.

Later Tuesday night, in what seems to be an unrelated case, an LAPD officer assisting in a probation check near South Los Angeles was shot in the face. He was hospitalized in stable condition and underwent surgery. A probation officer suffered a minor graze wound to his leg and was treated at the scene.

We are outraged and worried that an increasing number of criminals in our city have no qualms about brutally attacking and killing officers. What has always been a dangerous job has gotten a lot more dangerous of late.

Thankfully, the four officers shot on Tuesday are survivors of the violent, unprovoked attempts on their lives. They knowingly put their lives on the line when they went to work on Tuesday. L.A.’s streets and neighborhoods are safer today than they have been in decades, but our officers are not. Even as these recent attacks on officers have transpired, Governor Jerry Brown has been fighting an ill-advised Supreme Court order to reduce the inmate population in California by nearly 10,000 inmates by the end of 2013. Should Gov. Brown’s attempts to avoid this court order continue to be struck down by federal judges, every law-abiding citizen should be very worried about what the prison reduction requirement could portend for public safety in our city and country.

The hunt for the suspects in Tuesday’s attack on law enforcement continues as we write this blog post. We are confident that they will be arrested and brought to justice. In the meantime, the words of Chief Beck following Tuesday morning’s attack bear repeating:

“Early this morning we were – once again – reminded of the brazen, indiscriminate acts of violence committed against police officers and how inherently dangerous our work continues to be… Please continue to be vigilant and look out for each other. Take nothing for granted. Our LAPD family remains strong. We are bound by our commitment to serve and protect the community, including our brothers and sisters in blue.”