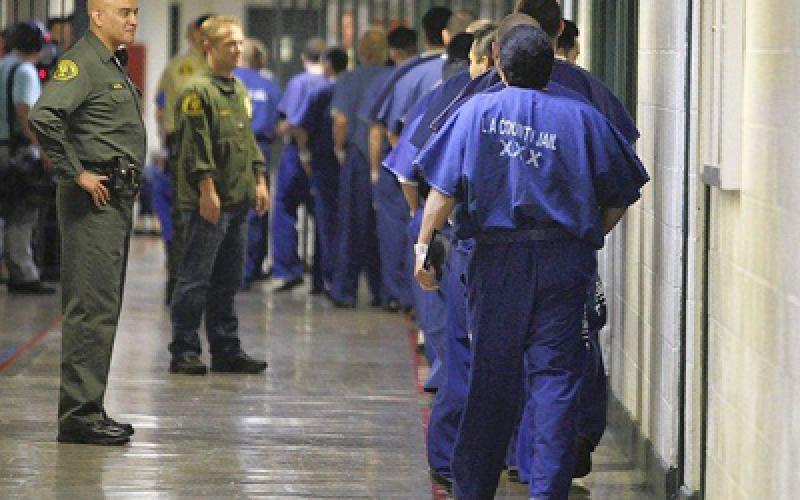 Inmates are watched by members of the Los Angeles County Sheriff's Department at the Men's Central Jail in Los Angeles. So far this year, the department has released more than 23,000 inmates before their jail terms were up. (Gary Friedman, Los Angeles Times)

Los Angeles Times reporters Jack Leonard and Abby Sewell turned to the California Public Records Act to get to the awful truth: More jail inmates in Los Angeles County are being set free after serving only a fraction of their sentences, and even inmates sentenced to jail for violence and sex crimes are serving as little as 40 percent of the time they were meant to spend behind bars.

Remember when incarceration – removal from society for a specified period of time – was punishment for and a deterrent to committing a criminal act? Well, it is less and less a punishment and deterrent these days thanks to the early release program that must make Los Angeles County the envy of criminals everywhere. Now you can commit all sorts of criminal activity, get apprehended by hard-working police officers, convicted by dedicated prosecutors, and serve little or no time behind bars. It is demoralizing for law enforcement, makes a mockery of the criminal justice system and seriously jeopardizes public safety.

We commend the enterprising reporters at the Times for shinning a bright light on the rapidly deteriorating Los Angeles County jail system. We urge Sheriff Baca, the County Board of Supervisors and – if necessary – the voters of Los Angeles County to take corrective action without delay.

At the same time, we have to call out the Times editorial board for an editorial published the same day that uses fuzzy logic and flimsy rationalizations to suggest there is no such thing as early release. Somehow, the Times would want us to believe that – except for inmates serving a life sentence – every inmate eventually gets released, so we shouldn’t be particularly concerned that criminals are being released way before their sentences are completed. Oh, please!

It is all well and good for government to develop and operate such programs. Indeed, some of these programs are very worthwhile and should be expanded as funding becomes available. But that shouldn’t mean a shortcut to freedom for felons who have committed serious crimes. Criminals who committed crimes need to be removed from society for an appropriate period of time for the safety of all law-abiding residents and the integrity of our criminal justice system.