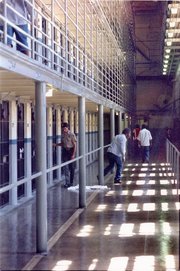 Gov. Schwarzenegger got an interesting offer Monday from Michigan Gov. Jennifer Granholm. But the California budget crisis may stand in the way of accepting it.

Granholm formally offered space in empty Michigan prisons to house some of the inmates California is running out of room for, according to an AP story. Michigan plans to close two prisons by the end of September. If California accepts the offer, it would save the jobs of about half of the 1,000 prison guards Michigan plans to lay off by Oct. 1.

Unfortunately, there’s no sign of a deal to close California’s $24.3 billion deficit. The state controller says he will have to start issuing IOUs unless lawmakers balance the budget by the end of the fiscal year on Tuesday. The state's deficit is roughly a quarter of the state's general fund and has been widening this year as tax revenue has plunged. Some $3 billion worth of IOUs will be issued in July unless a compromise on closing the deficit is reached quickly.

Will Michigan accept IOUs from California to house prisoners from the Golden State in lieu of setting a number of them free? Stay tuned…